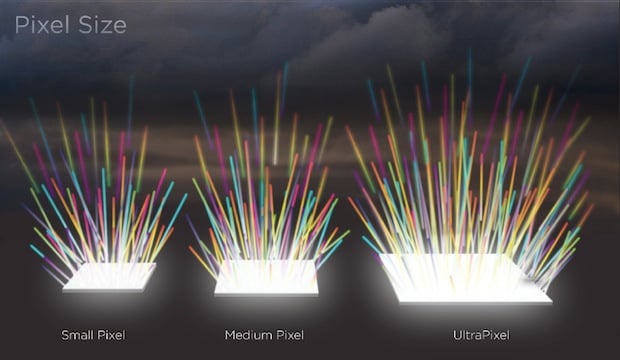 In an article on TechHive about the new HTC One, HTC’s director of special projects Symon Whitehorn uses an analogy that we’ve never heard before. In a bid to explain why the 4 million ultrapixels on the HTC One’s sensor are better than 8 million regular pixels on the HTC One X’s, he likened pixels to buckets, and photons to rain.

The old analogy that the industry uses is called pixel rain, so you can imagine photons coming down as rain—with photon rain being collected in buckets with the buckets being the pixel. Now you could put a lot of little cups out and try to collect the same amount of rain and you wind up getting noise between the cups as opposed to it all falling into one big bucket.

Because each ultrapixel allegedly captures over 300 percent more light than a regular pixel, the HTC One is, if we follow the analogy, using much bigger buckets. The analogy can only go so far, but it’s a good way to explain to your friends why bigger, not more, is better where pixels are concerned.

HTC One debuts UltraPixel technology, but is the phone’s camera all it’s cracked up to be? [TechHive via John Nack on Adobe]