A recent Washington Post article has drawn attention to a new trend that is arising among young girls on Instagram; a trend that has both parents and child safety advocates worried. The trend is Instagram beauty pageants, in which young girls submit pictures of themselves using hashtags like #beautycontest or #rateme, and subject themselves to the praise and/or ridicule of their many million Instagram peers.

The trend is troubling for many reasons. For one, many of the girls are under the minimum age of 13 that Facebook requires to use the service. For another, privacy advocates warn that many “contestants” fail to properly keep their identities a secret (while others blatantly give it out through Twitter and Facebook links). And that’s not even mentioning the many parents who are horrified that their daughters are ascribing to such a skin-deep definition of beauty. 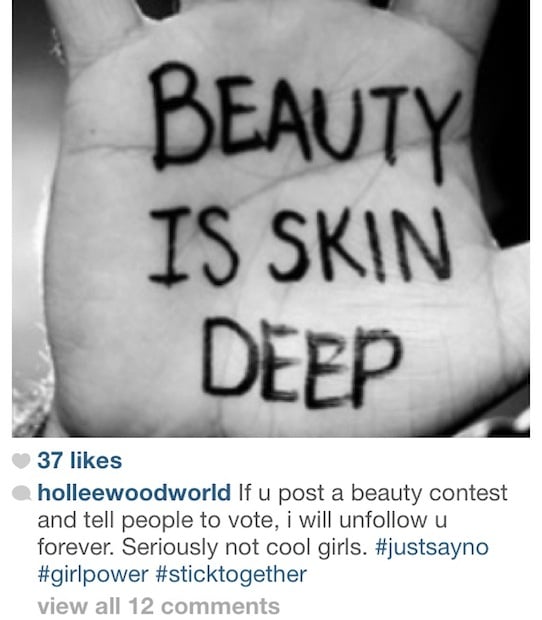 One such parent is Hollee Actman Becker, a writer and blogger from Philadelphia who posted the above photo to her Instagram account after discovering that her own daughter and several of her daughter’s friends had taken part in such a pageant last Saturday. Initially upset, she realized that, as she put it, they were “playing a game to which they had never been given the rules.” As she explains on her blog, suburbabble:

How could I blame them? … My own daughter waved the grids off as all in good fun until I actually explained to her what made them so offensive and vile. In the wake of events like what took place in Steubenville, it’s becoming more important than ever for us to empower our kids with the tools they need to decipher right from wrong — both online and IRL. And so instead of banishing the girls, I did this.

“This” being the photo you see above. Her plan seems to have worked, the pageants have received a lot of negative attention in the press while that photo sparked a “revolution” of sorts, where grids of “pageant” photos were being replaced by similarly uplifting alternatives.

Still, according to The Washington Post, plugging in the hashtag #beautycontest turns up almost 9,000 photos, while #rateme yielded over 27,000. It may take more than one mother’s viral photo to run this trend around.