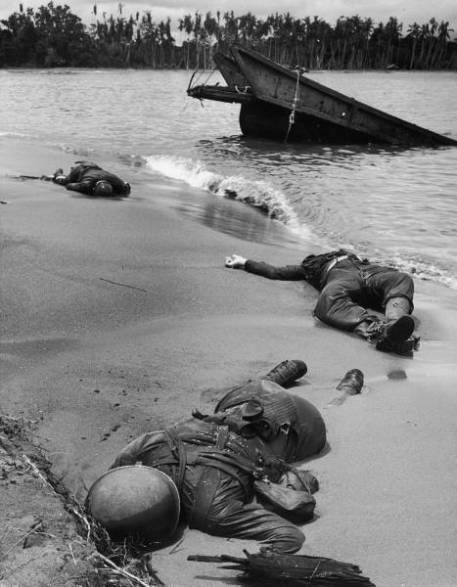 A recent article in the New York Times tells the story of one Addison Beecher Colvin Whipple — better known as Cal — to whom photojournalists in particular owe a great debt of gratitude. Mr. Whipple passed away last month at the age of 94, but his quest to get one particular photo published in 1943 has left a legacy that will last for many years to come.

Whipple was a writer and a censor fighter for Life best known for his fight to get the above photo — taken by photographer George Strock on a beach in Papua New Guinea — past the WWII military censors who were blocking the publications of any close-up photos of American soldiers killed in combat. But when Life requested that they be able to publish the photo, the censors said no. That’s where Whipple stepped in.

Mr. Whipple and his colleagues at Life believed that Mr. Strock’s photograph would provide a badly needed dose of reality for those on the home front who were growing complacent about the war effort. “I went from Army captain to major to colonel to general,” he recalled in a memoir written for his family, “until I wound up in the office of an assistant secretary of the Air Corps, who decided, ‘This has to go to the White House.’ ”

In September 1943, Whipple accomplished his goal when President Franklin D. Roosevelt decided to allow the publication of the image, saying that “the American people ought to be able to see their own boys as they fall in battle; to come directly and without words into the presence of their own dead.” And with that, the censorship rule was abolished.

Though President Roosevelt’s statement was sufficient in and of itself, Life published an editorial alongside the photo answering the question “why print this picture?” by aptly saying what photojournalists have known for years: “words are never enough . . . words do not exist to make us see, or know, or feel what it is like, what actually happens.”

After winning the fight he would come to be known for, Whipple went on to a successful career as a writer and editor for both Life Magazine and Time/Life Books until his retirement in 1975. And even though he is no longer with us, he will be remembered as a writer whose determination to fight censorship helped shape photojournalism.