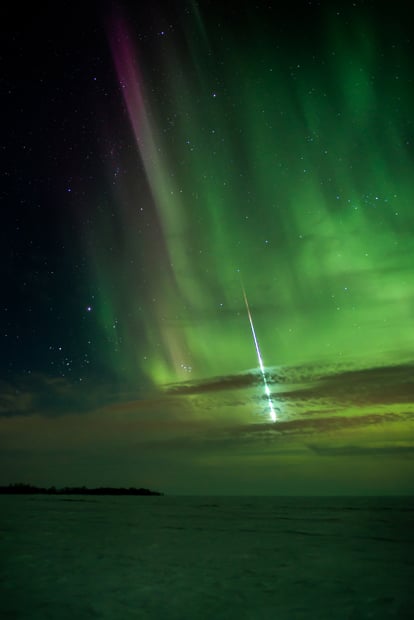 Photographer Shannon Bileski of Signature Exposures captured this beautiful photograph last Friday at Patricia Beach in Canada. It shows a bright meteor streaking through a sky filled with the green glow of the aurora borealis.


Bileski tells us she was out at the beach attempting to witness and photograph the northern lights with others from a photography club and an astronomy club.

The aurora was on and off all night, but at 11:10pm just as everyone else was packing up their camera gear, the green glow in the sky intensified. Bileski began snapping some shots with her Nikon D800 and Nikon 24-70mm f/2.8 lens, with settings at f/3.2, 8s, and ISO 800.

Suddenly, during one of the 8-second exposures, there was an intense streak of light in the sky and bright green flashes. It was a meteor that had broken up in the atmosphere, and Bileski captured the whole event as the photo above.

To see such a bright meteor is a rare occurrence already, but to capture one on camera whizzing toward Earth through the northern lights? “Amazing,” Bileski says.

You can enjoy a larger version of the photograph here.

Image credits: Photographs by Shannon Bileski and used with permission