This post could also be titled “How Not to Photograph Endangered Male Animals.” The video above was uploaded to the Web by the BBC back in 2009 and shows photographer and zoologist Mark Carwardine finding and photographing a rare parrot in a New Zealand forest. Unfortunately for Carwardine — and hilariously for the rest of us — he gets closer to the bird than he was planning to. 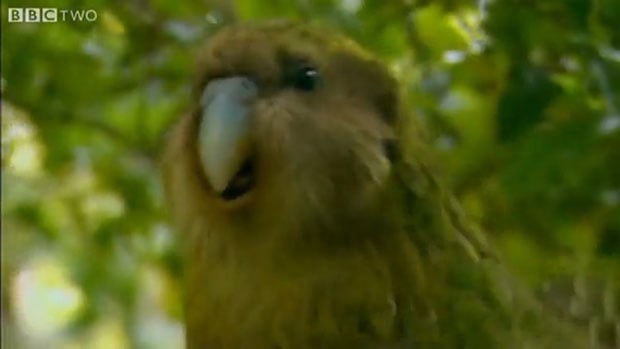 The bird in the clip is a Kakapo, which is also known as an owl parrot. It’s a fat, flightless bird that’s on the brink of extinction — it was estimated that there were only 126 living Kakapos back in February 2012.

Given how few of the parrots there are in existence, finding a suitable mate isn’t the easiest task for male Kakapos (there are only tens of females scattered across the forests of the sizable island). In the case of Carwardine’s Kakapo above, the bird mistakes the photographer’s head for a fellow Kapapo. Hilarity ensues.