Here’s a pro tip: if you ever find yourself with a strong desire to photograph crocodiles in their natural habitat, don’t do it like the photographer in the video above (warning: it contains a bit of strong language).

It was shot by a man named David Clow on March 18, 2013 in Rio Tarcoles, Costa Rica. Clow’s friend Antonio Ruiz was photographing crocodiles up close with his DSLR while others tossed chunks of meat into the water. The problem was, Ruiz positioned himself right on the edge of the river rather than at the relatively safe distance everyone else was standing at. 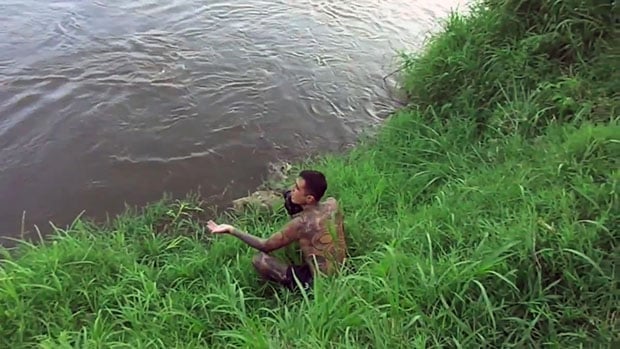 The location is named “Crocodile Bridge,” so the water was teeming with crocs. After snapping some photographs of the creatures battling over the free food, Ruiz had an experience he will probably never forget. He just narrowly avoided a lunge by a hungry crocodile, coming inches from becoming its next meal.

Clow writes that Ruiz is simply a daredevil photographer — not a dumb one:

It is called living on the edge, not being dumb. It is called guts, not stupidity. Not everyone can afford a huge lens,﻿ eh. My friend, Antonio, may have a death wish, and he may be a little crazy, but he is not stupid. He is a hard dude. I wanted to be down there. Like he says in the video, everyone made it worse yelling. He knows how to behave around them. Try not to be too mean, people. Everyone has a heart, and the most fragile ones, the ones on the edge, are easily broken.

Thankfully, it’s a story with a happy ending. Ruiz escaped with close-up photos and a crazy experience, and Clow walked away with a video that’s now going viral across the web.

Update: Here’s an online photo album with photographs of the crocodiles.

Thanks for sending in the tip, Malcolm!

Stop Motion Musical Tours Through a City and a School