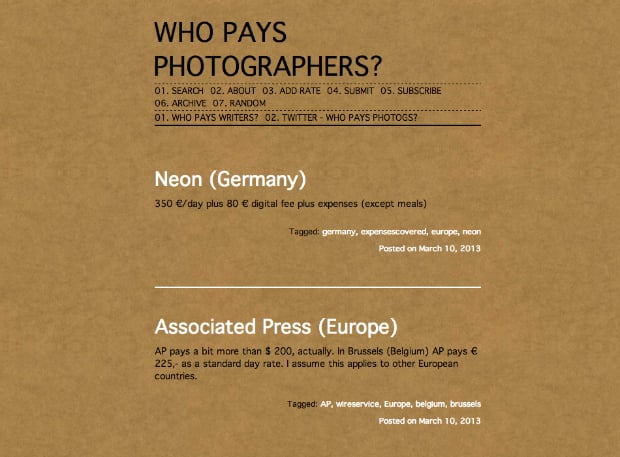 The idea behind writer Manjula Martin‘s brain child Who Pays Writers has now been expanded to the world of photography thanks to an anonymous editorial photographer and his spinoff, Who Pays Photographers. And like its predecessor, it’s a place where photographers can come and anonymously submit reports that detail the who and how much (if any) of getting paid as a photographer.

Having only gone live on March 8th, the website has already seen a wide range of reports, from fair to free. At $750 per day — plus equipment, assistants and mileage — Rodale Publications (the folks behind Men’s Health, Women’s Health, Runner’s World, etc.) stands out as one of the better publishers to work for.

On the other side of the spectrum, one user reports being offered $0 by an ESPN producer for a stock image. Although, to be fair, what seem to be ESPN’s official prices for work are outlined later by another user; prices that fall along the same lines as Rodale’s. 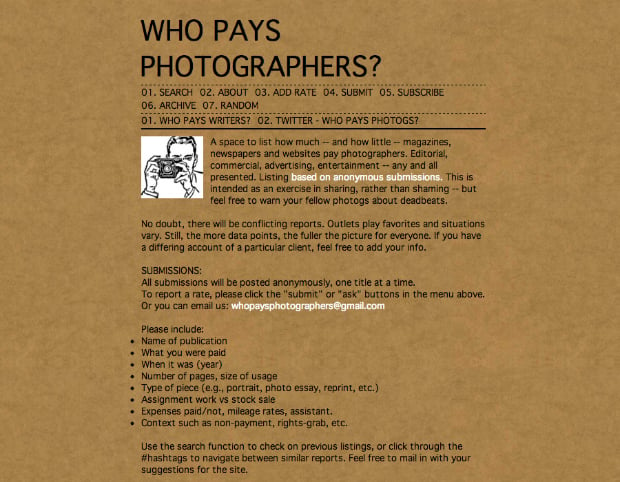 If you feel you have something to add to the conversation, you can submit your own experiences to the website by e-mailing them to whopaysphotographers@gmail.com. Just be sure to include the publication, what you were paid, what year it was, the number of pages, size of usage, type of piece, whether it was assignment work or a stock sale, whether or not expenses were paid, and context such as non-payment, rights-grabs, etc.

Of course, conflicting reports (like the two ESPN ones) are bound to arise. As the about section of the website explains, “outlets play favorites and situations vary.” But over time, Who Pays Photographers could become a valuable resource for photographers to consult before seeking or accepting work with any one particular publication (and not just a source of anxiety for photojournalists-to-be on Reddit)