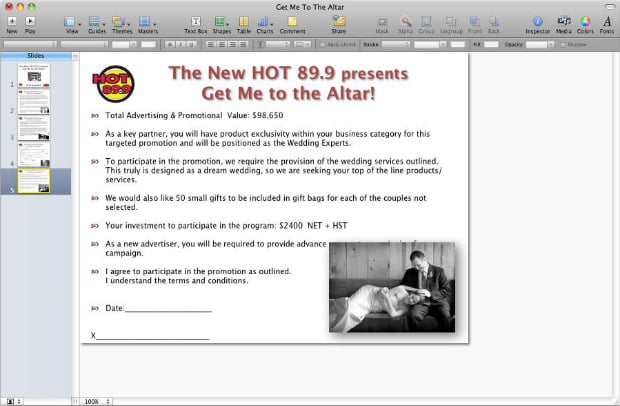 The most recent copyright dispute to hit our radar is one between Canada-based Barbara Ann Studios and an Ottawa radio station called HOT 89.9. Each spring, the radio station runs a contest in which they get a couple married in 24-hours.

Ann isn’t a big fan of the contest, and so when she saw her image was being used to illustrate the station’s marketing kit, she began a dialogue with the company to get the image taken down and receive compensation for what amounted to commercial use of her image. That’s when things got ugly.

After contacting station owner NewsCap Radio, she initially received a very polite e-mail apologizing, explaining that they found the image via Google, and assuring her that they take copyright very seriously. However, after refusing the $40-$100 the company typically pays for this sort of use, and detailing the amount she expected to receive for the altered, commercial use of her image, the tone quickly turned negative. 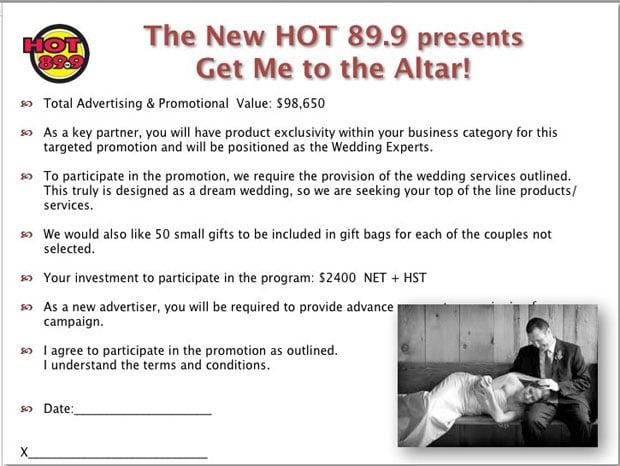 Barb you were kind enough to provide us with a few definitions. Here is one I just looked up:

The practice of obtaining something, esp. money through force or threats

You are obviously a very talented photographer, I would stick with that. Extortion is not your thing.

Ann is no longer seeking payment, and has instead taken to Facebook to spread the word and hopefully prevent this sort of thing from happening to anybody else. The plan seems to be working, as she has received almost 4,000 shares for her trouble.

For their part, HOT 89.9 posted the entire e-mail conversation on their Facebook account, leading to 1000+ comments, many attacking Ann personally. The station has since removed the post and replaced it with one stating that the issue will “remain private.”

Update: Jack Small has shared the entire email address in the comments below. Here it is in chronological order:

Thanks for your email. We take the copyright laws in this country very seriously.

Can you provide me with a copy of the image in question and I will have it removed immediately.

Also, if you can provide me with the names of the individuals in our marketing department that you contacted previously. You should have received a response much sooner than this and I apologize for that delay.

The problem is that it was in PRINT

IT was on marketing material given to potential clients to try and get them to advertise in the contest.

Emails were sent to Ian Balfour and mark russet

Now I understand. Thank you for clarifying. The image will be changed today.

The only good news is that the material you reference has not been mass-produced and is not for public consumption. The material is printed one at a time and has been seen by fewer than 10 clients in private meetings.

The image will be removed today.

Thanks again for bringing this to our attention.

1 client is 1 too many you do understand that?

I want an explanation as to why it was used

Yes, one is too many.

The image was captured innocently during a Google image search of “Strathmere Weddings.” Since Strathmere is a sponsor of the event and there were no copyright warnings attached to the image, it was erroneously placed among the other selected photos.

Again, I apologize for any frustration or inconvenience this may have caused you.

Copyright is the right of a creator of a work to prevent others from using his or her work without permission. A creator of a work has the exclusive right to say yes or no to various uses of a work such as reproducing it (e.g., photocopying and scanning it into a computer), adapting and translating it, transmitting it and performing it in public.
IF A WORK IS REPRODUCED FOR NON-PROFIT, NON-COMMERCIAL PURPOSES, DO YOU NEED TO OBTAIN PERMISSION FROM THE COPYRIGHT HOLDER TO USE THE WORK?

Permission must be obtained prior to using a substantial part of a copyright work, whether or not any income is derived from its use.

The law clearly states they had to ask permission. They did not.

I am quite sure that just as you cannot claim you did not know the speed limit (ignorance is not a reason), one cannot “innocently” steal an image.

This has moved beyond frustration. The image was used without my permission and having it “fluffed off and only 10 people saw it and it was innocent” does not make my mood about this any better. I am not going back and forth with excuses. I am quite sure compensation can be determined between myself and the radio station.

Agreed. What would you feel is fair, given the limited (and now discontinued) use of your image?

Bottom line, given the fact that a radio station is in the business of playing music that is legally obtained, they are fully aware of our canadian copyright laws. If they are not familiar, it is the duty of the employer to show due diligence in educating their employees on such matters. Either they were not educated on copyright or they were and chose to ignore it. Ignorance of the law is not an excuse and does not hold up in our courts either.

No matter if the picture was seen by one or many, the fact does not change that the law was broken. My image was illegally obtained and used without permission, clearly breaking Canadian copyright laws.

My fees to photograph weddings range from $3995 – $7795 so it is very reasonable to expect a flat rate of $2000 given the manner in which the image was stolen and the blatant attempt to undermine the seriousness of it in some comments made to me in emails today.

The use of my image was unwarranted when clearly the marketing department could have gone to the previous photographer on the contest, Christine Tripp, for a promotional image. However, they did not. They decided to use my intellectual property without permission and/or compensation.

Please respond to my email within 24 hrs so I know where you stand on the compensation line. This line is non negotiable.

Since you suggest that your $2,000 fee is non-negotiable, I will not engage you at this time.

Btw – we typically pay between $40 and $100 for the public use of most images. I am not sure that our brief and limited use of your image would constitute a public use, but in good faith, we were prepared to pay. It appears that we are too far apart to resolve this issue between the two of us.

I wish you all the best in your future endeavors.

You both realize no one approached me to use the image right? $40 might have been reasonable for a first year hack photographer BEFORE it was stolen.

So before I take matters to the next level, I will ask once more to be compensated in the amount I asked.

You were kind enough to provide us with a few definitions. Here’s one I just looked up:

ex•tor•tion
/ikˈstôrSHən/
Noun
The practice of obtaining something, esp. money, through force or threats.

You are obviously a very talented photographer. I would stick with that.
Extortion is not your thing.

I am not extorting anything. I did not break the law. Your employees did. Please do not make this a blame the victim. I was merely giving you a chance to solve this before I had to escalate it.

Thanks for sending in the tip, Joshua and Jeffrey!