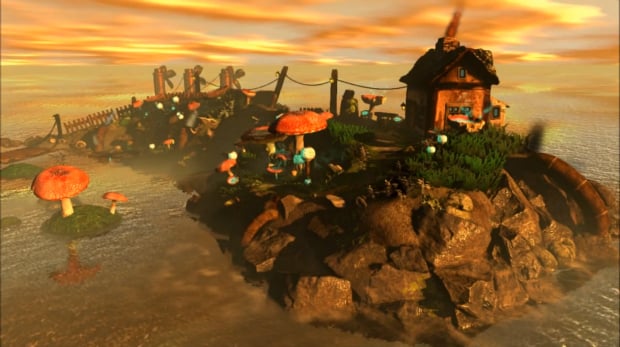 For the upcoming game Rustclad, indie video game studio Skull Theatre is taking a different approach towards designing a virtual world. Instead of creating it entirely inside of a 3D design program and trying to mimic reality, the studio is using a technique called photogrammetry to design the world of Rustclad using photographs of artistically altered real world objects.

According to Skull Theatre, photogrammetry is “the process of creating a geometric representation of an object from photographs.” The team creates (or finds) props in the real world, photographs them from several angles using a custom-built lighting rig and stage, and then uses the freeware software 123D Catch to literally bring these objects into the Rustclad world.

Although the Skull Theatre team was driven to use this technique partially out of a need to find a cheaper solution, the results they’re getting by dressing up real world objects are pretty stunning. Take a look:

The process isn’t new, but to the team’s knowledge this is the first time someone is using photogrammetry to create all of their game art. And although there are a few limitations, there are plenty of advantages too:

Digital artistry has a high learning curve and can involve years of schooling or job-related experience in order for an artist to produce high-quality digital art. Photogrammetry on the other hand, lets you fall back on classical skills, working in a medium where realism is a natural byproduct rather than a conscious effort. Similarly, you can take advantage of found art, which takes no effort to create. All of the rocks and plants in our game were found in our neighborhood. And last but certainly not least, it’s really fun to make a video game by hand.

You can get more info on Rustclad and the fascinating way in which Skull Theatre is designing it over on the studio’s website. And while you’re there, be sure to check out the Photogrammetry FAQ; all of the software and hardware Skull is using to create the game is available to you and me for no more than the studio spent on it (in the case of the 123D Catch software, entirely free). Photographers interested in video game design should definitely take a look.

Color, Varnish and Passion: A Look Inside an Ink Factory

Colorful Fashion-Forward Camera Straps Made From Climbing Rope and Chains