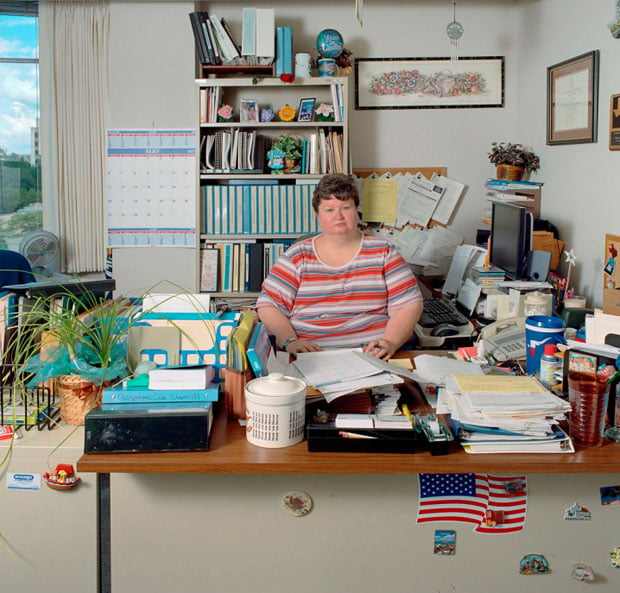 Bureaucratics is a project by photographer Jan Banning that consists of 50 portraits captured in 8 countries on 5 continents around the world. The goal: to offer a comparative look at the culture, rituals, and symbols of state civil administrations. Basically, Banning wanted to document the face of bureaucracy by capturing portraits of government workers at their posts.


The photo above shows Dede McEachern, the director of licensing at the Texas Department of Licensing and Regulations. She made $5,833 a month back when the photo was captured in 2007.

He then visited hundreds of offices in each country, dropping in on civil servants in different services and of different levels. He visits were always unannounced in order to keep the scene as authentic as possible (the subjects did not have time to prepare their appearance or tidy up their offices). Thus, each portraits hows exactly what local citizens encounter when they visit the offices.

Here’s what Banning says about the approach he had with the photos:

The photography has a conceptual, typological approach […] Each subject is posed behind his or her desk. The photos all have a square format (fitting the subject), are shot from the same height (that of the client), with the desk – its front or side photographed parallel to the horizontal edges of the frame – serving as a bulwark protecting the representative of rule and regulation against the individual citizen, the warm-blooded exception. They are full of telling details that sometimes reveal the way the state proclaims its power or the bureaucrat’s rank and function, sometimes of a more private character and are accompanied by information such as name, age, function and salary. Though there is a high degree of humour and absurdity in these photos, they also show compassion with the inhabitants of the state’s paper labyrinth.

You can find the entire collection of photos from the project over on Banning’s website.

Image credit: Photographs by Jan Banning and used with permission