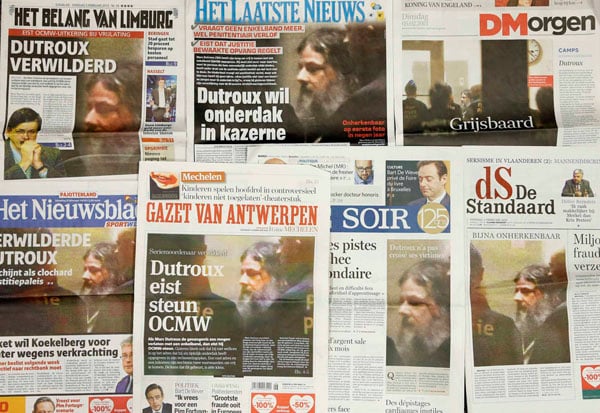 Belgian photographer Francois Lenoir has written an interesting account of how he managed to snap an extremely rare photo of serial killer Marc Dutroux through prison windows with some good ol’ fashioned patience (and a dash of good fortune).

[…] the corridor Dutroux was supposed to take was now just 50 meters away. I decided to trust my instincts and I waited to see if he came past. I was there for more than an hour […] we would have nothing for our clients if my decision was wrong. I realized that I had made the right call when I saw the police starting to move along the corridor, and blocking open the doors. Two minutes later, I saw the police officers were escorting somebody along the corridor, although at this point I was not sure who the person was. They were moving quickly, and it was too far away to see properly, especially as the police were trying to hide the person from view. They passed in just a couple of seconds and during that time I managed to shoot a series of 20 pictures.

When he zoomed in on one of those 20 photos afterward, Lenoir discovered that he had captured the first photo of his country’s most notorious killer in roughly a decade. The next day, virtually ever major newspaper in Belgium ran Lenoir’s photo on their front page.

The story reminds us a lot of a similar one we shared last year, on how four photojournalism students managed to beat major news organizations to capturing the first photographs of the Unabomber.

All or nothing [Reuters Photographers Blog]

Thanks for sending in the tip, Martijn!

Image credit: Photograph by Francois Lenoir/Reuters and used with permission

Photographs of Commonly Paired Foods Bound Together With String

Your DSLR is a “Rainforest of Bacteria,” But It’s Probably Okay