Improperly handling people’s photos is a huge faux pas that can generate a lot of furor. If you need an example, look no further than Instagram’s policy debacle. But Flickr recently messed up, and the company is trying to apologize and clean up its mess as quickly and quietly as possible before it gets in the way of what has become a pretty remarkable renaissance.

According to Barry Schwartz of Marketing Land, due to a software bug, his and many other users’ photos that were set to private were actually publicly accessible for nearly a month.

Fortunately, if you don’t know about the problem then you probably weren’t affected by it; everybody Flickr thought might have been affected has been sent an e-mail from VP Brett Wayn. But, according to that e-mail, any photos uploaded between April and December of 2012 were accessible to the general public between January 18th and February 7th, even if they were set to private. 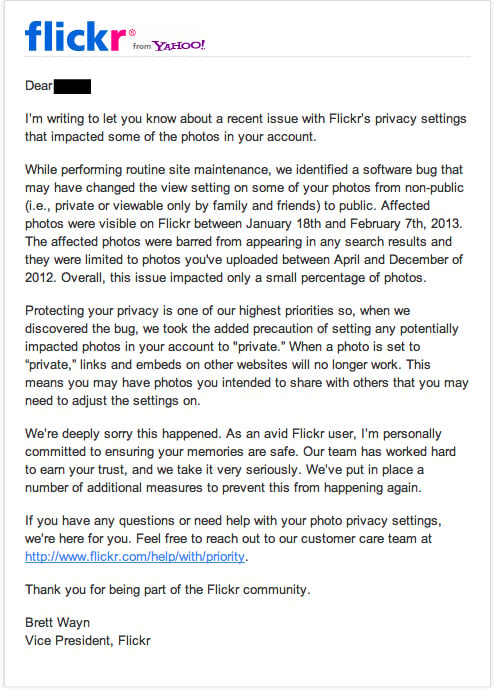 On the bright side, the photos were neither indexed by search engines, nor included in Flickr’s search, so ‘intruders’ would have had to have a direct link to your photography. However, in fixing the problem, Flickr may have caused another.

As a precaution, Flickr has changed any photos it believed to have been accidentally ‘publicized’ back to private, and irked a few users in the process. Changing a photo to private removes favorites, breaks share links, and removes website embeds … not something you want happening by accident.

Those who want to make sure their photos weren’t affected can do so by visiting a special link provided by Flickr. And if you’re had your photos turned private by accident, we’re sorry to say you’ll have to manually change your settings back and re-embed any affected images.