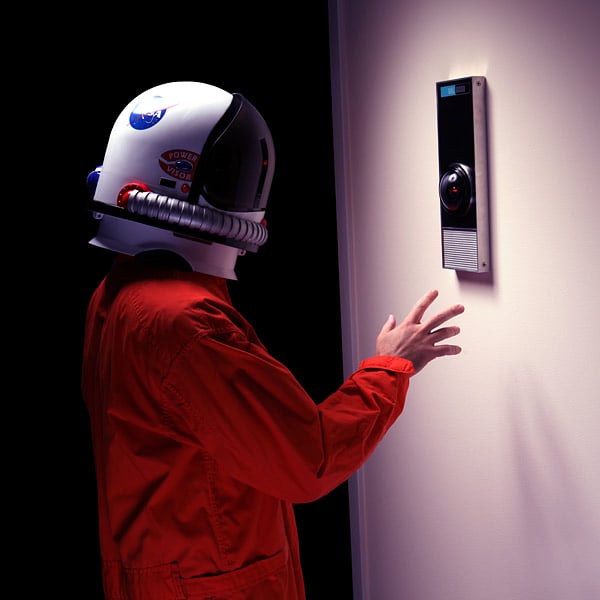 Instantly recognizable by his eerily calm voice and red, all-seeing eye (not to mention his penchant for killing crew members when they became troublesome), HAL 9000 is listed as the 13th greatest film villain in AFI’s 100 Years…100 Heroes & Villains. But did you know that HAL 9000’s all-seeing eye was actually a Nikkor 8mm f/8 fisheye lens?

That last tidbit arose from the depths of random movie knowledge recently when ThinkGeek decided to put together a $500, movie-accurate version of HAL 9000. They got ahold of the original blueprints and began a 100-percent accurate recreation, with one exception: that Nikkor lens.

In the film, the lens was a very rare and expensive Nikkor fish-eye lens. The HAL 9000 Life-Size Replica features a custom-ground replica, with a sticker of the writing on the Nikkor lens (in case you want your HAL to be accurate down to the close-ups).

Here’s a look at ThinkGeek’s creation:

Interestingly enough, the lens used for HAL 9000’s all-seeing point of view shots was different. Kubrick needed a wide-angle fisheye lens that would fit onto his shooting camera, and at the time the Fairchild-Curtis 160-degree wide-angle lens was the only one that would work.

But from the crew members’ perspective, one of the most infamous artificial intelligences in movie history was nothing more than a Nikkor fisheye lens and a metal faceplate. We can almost hear the “See, Nikon is evil” jokes from the Canon-faithful already.

Thanks for sending in the tip, Keith!

Inside a Paparazzo’s Photography Bag: Cameras, Lenses and Pepper Spray