At the CP+ show in Japan, Ricoh is showing off a new camera prototype its developing that can capture full 360-degree immersive photographs with a singel push of the shutter. The omnidirectional camera looks like a cross between an electric toothbrush and a hammerhead shark. Lift it up into the air, press a button, and it will capture an image that shows every direction around you.

The camera actually comprises two lenses and two sensors. The dual fish-eye lens setup captures two photos that each show 180-degrees on opposite sides of the device. Those images are then merged together by the camera and can be beamed to a tablet or smartphone for interactive viewing. 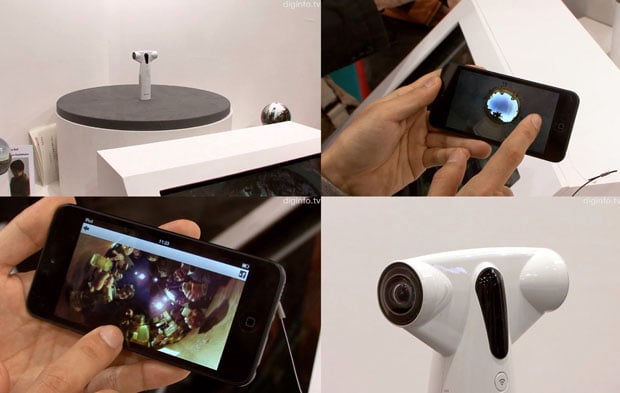 Using the app, you swipe your finger around to navigate the scene. Pinch the screen, and you can view the photo as a circle or a sphere.

In its current form the camera is designed for still photography, but the company is planning to make it video capable as well.

Ricoh says that it’s currently in the process of gauging interest to see if there’s any demand:

Right now, we’re at the stage of seeing how people react. If people think this camera is fun, we’d like to commercialize it, and make it a bit smaller. We want to keep developing it, so we can offer a version for consumers.

360-degree panorama apps are become pretty popular and common in the world of smartphone apps — Google recently launched its own official app for Android phones — but we have yet to see a widely distributed camera dedicated to capturing 360-degree images with a single push of a button.

Ricoh could certainly become a pioneer in this new niche if consumers start becoming enthusiastic about this kind of technology.