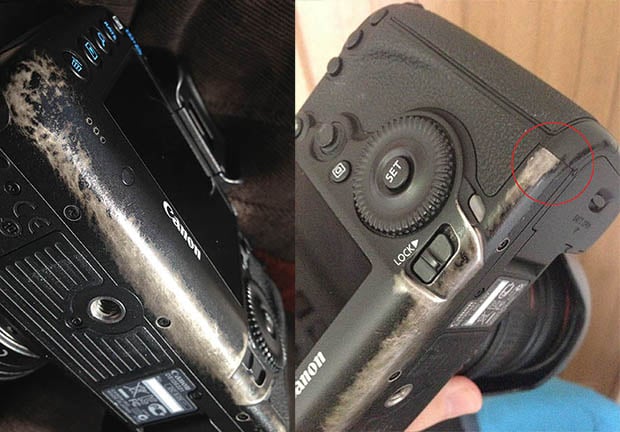 This isn’t a biggie as far as camera issues go, but there are a few photographers reporting some strange discoloration on sections of their Canon 5D Mark III that makes the camera look like it’s a lot older and more beat up than it actually is.

Over on the Canon Rumors forum, a member named Adderal writes,

I have a 5D Mark III which I purchased new, directly from Amazon when they were released early this year. This summer, around June/July I noticed what appeared to be discoloration or pealing paint under the camera where the metal body meets the plastic. It was initially very minor and I thought I must have scuffed it somehow on a table or while the field. However, it has been consistently ‘growing’ ever since then. It has grown from pea sized to the entire bottom of the camera within a few months […]

I am not one to coddle my equipment; but I also don’t throw it around either. I certainly don’t drag it around on things which would peal off the paint like this. Usually a tripod mount is on the bottom which would prevent this anyway (I took it off specifically for these pictures).

Adderal reports that the issue is very localized; the top and front are spotless. This isn’t anything that affects images, of course, but it likely kills the camera’s resale value.

Thanks for sending in the tip, Scott!

A Necklace That Turns Your Neckline Into a Mini Photo Wall

‘Want More Megapixels? Be Careful What You Wish For’