National Geographic photographer and filmmakers do some pretty crazy stuff and use some pretty crazy gear in order to capture the perfect shot. They’re the type of people who see a large shark and, instead of fleeing the scene, think to themselves, “we should attach a camera to that thing.” And then they actually do it.

Mounting cameras on sharks is risky business, though, and the video above shows just how dangerous it can be. In it, marine biologist Greg Marshall tells of his first attempt at deploying his camera onto the back of a large shark back in 1992. It didn’t go according to plan. 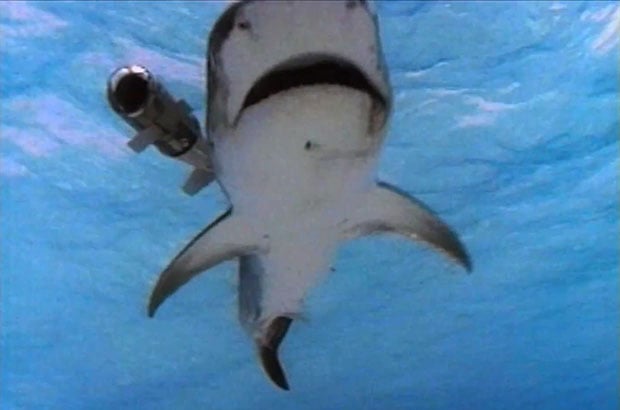 Marshall explains that “the concept was pretty straightforward” and involved a few easy steps: catch the shark, control it, dive with it, and mount the camera. What he didn’t expect was that the shark wasn’t very enthusiastic about having a camera fixed to its back, which led to a near-death experience for a National Geographic cameraman (don’t worry, he’s fine). The National Geographic website has an entire section dedicated to its Crittercam projects. Here’s the story behind how the camera system came about:

In 1986, while diving off the coast of Belize, marine biologist Greg Marshall encountered a shark. The shark approached him, then disappeared with three quick strokes of its tail. Stuck to the shark’s belly was a remora fish. As Greg watched the shark disappear, it occurred to him that if he deployed a camera in place of the remora, he could observe the shark’s behavior unfold without disturbing the shark.

Inspired, Greg built the first prototype of what would come to be called Crittercam and deployed it on a sea turtle in 1987. The turtle behaved normally—the first indication that this type of system had potential as a research tool.

Since 1987, the Crittercam has been deployed over 600 times on 50 different animal species (e.g. sharks, whales, penguins, lions, grizzly bears). The imagery captured by the cameras is transmitted to receiving stations using radio waves. Despite what you might think, the researchers rarely lose any of their cameras — the recovery rate for the 600+ deployments so far is roughly 97%.

‘Consistent Quality Photographic Film Will Be Impossible to Make’

Photos of an Island Across Four Seasons