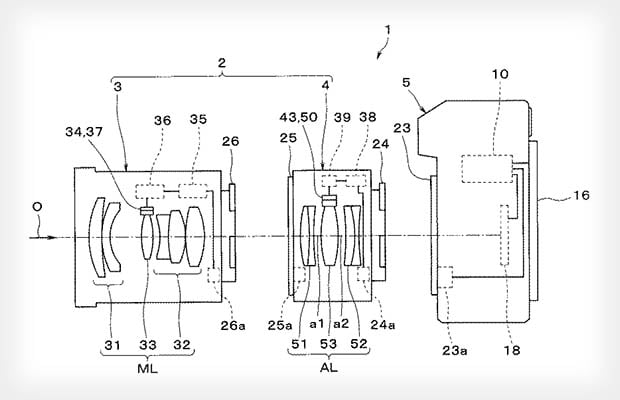 Olympus currently offers a $144 adapter called the MMF-2 for photographers who want to use an existing collection of Four Thirds-mount lenses on a Micro Four Thirds camera. The accessory makes the lenses mountable and acts as a middleman between the lenses and the cameras, but its features pretty much end there. It appears that Olympus is working on a much fancier adapter: one that actually contains lens elements and contains focusing/stabilization features as well.

Japanese camera blog Egami spotted the accessory in a patent that was filed by Olympus in April of last year and published just last week.

Illustrations in the document (one of which is shown above) shows that the adapter is somewhat bulky and contains 5 lens elements within.

It will reportedly have built-in high-speed autofocus and image-stabilization — a boon for photographers (e.g. wildlife, sports) who would like to use telephoto lenses to capture fast-moving subjects.

This patent comes just a few months after Olympus reaffirmed its commitment to the Four Thirds format by announcing that its currently building a new camera for the lenses.

No word yet on when we might see this high-tech adapter announced, but we’re guessing it’ll cost a good deal more than $144.