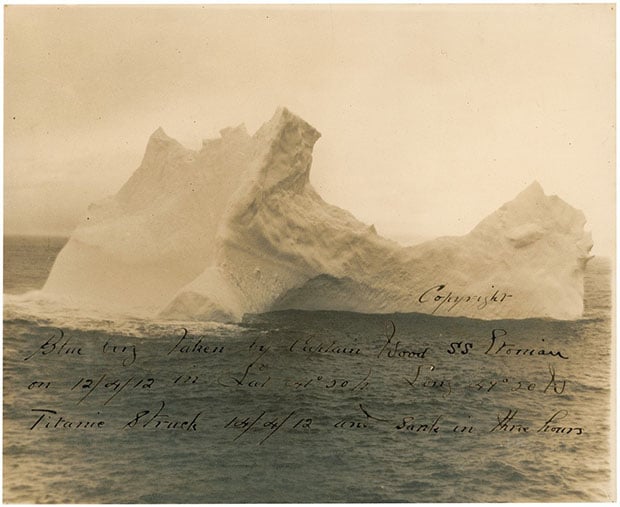 On the night of April 14th, 1912, the Titanic collided with a massive iceberg and sank, ending the lives of more than 1,000 people and becoming one of the deadliest maritime disasters in history. Now, one hundred years later, a photo that may the only surviving print showing that infamous chunk of ice is going up for auction. It’s expected to fetch up to $10,000.


The photo is being sold by American auction house RR Auction, which lists the print’s title as, “The Iceberg that Sunk Titanic.”

The 9.75×8-inch photograph was snapped by Captain W. F. Wood of a ship named S. S. Etonian, two days prior to the event.

Scribbled on the front of the photo are the words,

Although there are no known photos of the actual iceberg taken on the day of the tragedy, there are a number of reasons that have led experts to believe the one shown in this photo is that very iceberg.

First, it was captured at a location 2-3 days (in iceberg floating time) from were the ship sank. Second, the shape of the iceberg matches the sketches offered by eyewitnesses who survived the disaster, including the lookout who first spotted the ice in the horizon.

Finally, the iceberg’s shape resembles another photo (seen in the 1976 book A Night to Remember) taken from a ship named Prinz Adalbert, which was present in the area during the day after the sinking.

RR Auction notes that the difference in appearance between the two icebergs may be “attributable to the angle of the photographer and the aftermath of impact,” and that all these reasons taken together have allowed “noted Titanic experts to establish this photograph as capturing the iceberg everyone has been talking about for the past century.”

In October of last year, we shared a number of unseen photos taken the morning after the sinking. In one of the photos there appears to be an iceberg in the horizon, but it’s difficult to discern whether it resembles the one(s) seen here.

It’ll be interesting to see how much this photo actually sells for. We’ll update this post after the auction ends on December 16th, 2012.