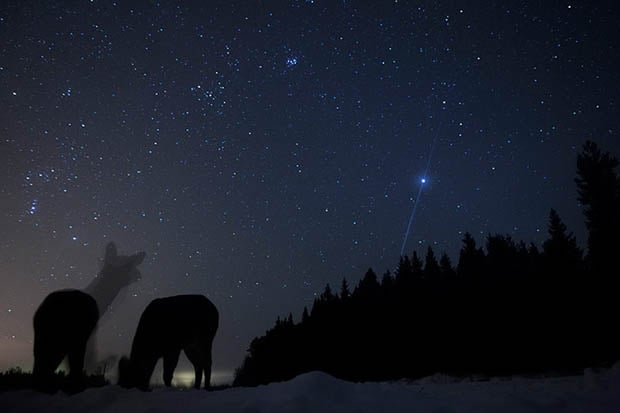 There are two brothers in my home village who look after the game in the area and feed them regularly at several locations in winter. I was welcome to photograph white-tailed deer at one of their feeding places at night. I buried my sound isolated camera box in the snow nearby. In my warm hide about 50 meters away I was ready with the camera‘s remote release. I used my other camera and a 300mm lens to check the scene. It was extremely difficult to see what was going on at the feeding place even though I had exhausted ISO and exposure values to their absolute maximum to give me at least a slight idea when to trigger the camera. I took many photographs, but often the deer would move too fast or in the wrong direction given the long exposure time. When I finally saw this image on my computer screen, I was very pleased with the result.

(via GDT via Photojojo)