Slit-scan imaging can make for some pretty trippy photos and videos. The technique involves capturing (or displaying) one “slit” at a time through a frame, causing motion to take on a bizarre appearance as each line in the image shows a slightly different moment in time. French filmmakers Adrien Mondot and Claire Bardainne used the technique a couple of years ago for the video above, which makes two dancers look like human Slinkys. 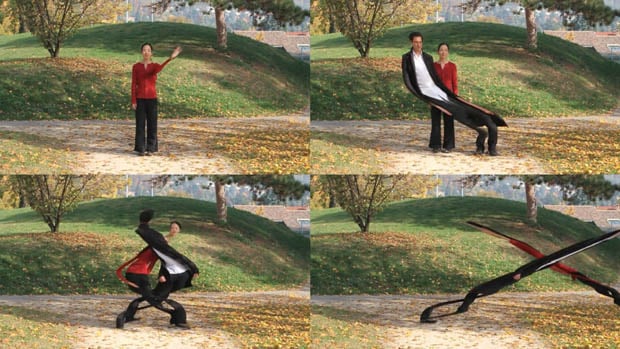 The short is titled “timeRemapExportHD”, and was captured using an ordinary Canon 7D at 60 frames per second. The footage was then “time remapped” afterward to create the slit-scan effect.

Slit-scan is a type of strip photography. Here’s an explanation:

Strip photography is a photographic technique of capturing a 2-dimensional image as a sequence of 1-dimensional images over time, rather than a single 2-dimensional at one point in time (the full field). As one moves across (in the direction of scanning), one moves in time, rather than, or in addition to, moving in space. The image can be loosely interpreted as a collection of thin vertical or horizontal strips patched together, hence the name. This is correct if the strips are discrete, as in a digital sensor that captures one line at a time, but in film photography, the image is produced continuously, and thus the “strips” are infinitesimal – a smooth gradation.

As we’ve shared before, one of the common applications for this technique is for photo finishes in sports.

(via Colossal via The Creators Project)

Kenko Filter Stick is like a Lorgnette for Your Camera Lens