Here’s a powerful video shared by The Economist a couple of years ago that features acclaimed British photojournalist Don McCullin talking about his 50 years of photographing war, atrocities, and human suffering. (Warning: it contains disturbing images.)


McCullin reveals that he continues to pay a heavy price for his work in bringing haunting images into public consciousness:

These pictures live in my house. They live in my soul and they live in my house. And I think they somewhat poison that beautiful house where I live. In a way, war has kind of vanquished me, really. There’s a massive amount of contradiction swimming around in me… confusion… There’s not a great deal of room for joy. I do sound rather damaged.

When I go into the darkroom, I’m totally in my own territory […] I need nothing in that darkroom but the opportunity to drop a few sheets of paper in the developer and listen to classical music, and I feel as if I’ve levitated myself away from all the evils of the world.

Just how close did McCullin get to the “evils of the world” he was documenting? Well, in 1968, his Nikon F SLR camera was struck by an AK-47 bullet that was intended for him: 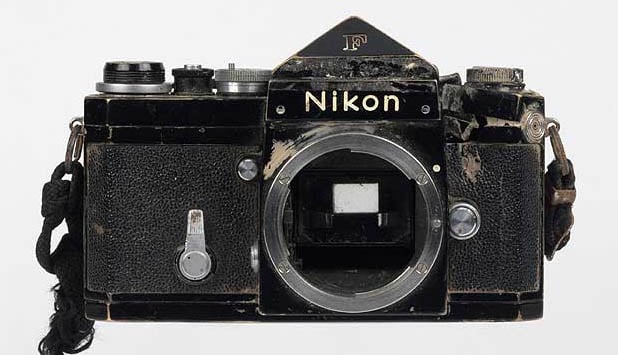 You can find out more about McCullin’s life and work over at Contact Press Images and on Wikipedia. We featured another short interview a year ago in which McCullin also talked about his struggle for peace of mind.