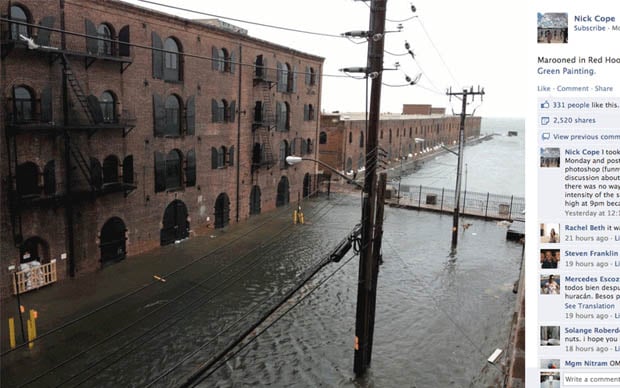 When Hurricane Sandy hit the East Coast, an iPhone photo by photographer Nick Cope was one of the first to go viral and attract the attention of news organizations. American Photo has an interesting interview with Cope in which he shares what it was like to have the world pounce on his photo:

I suppose the way the news cycle moves so quickly today, I think there’s a race to get content out as quickly as possible. Anyone can be a content creator—I took an iPhone photo literally in my bathrobe, and within a couple of hours, it had been viewed thousands, hundreds of thousands of times […]

Maybe the most bizarre and amusing part of the whole thing was that I did get contacted from various news agencies that wanted [eyewitness accounts]. I was interviewed multiple times throughout the day—people would call who were working on stories and would ask, “What do you see? What is it like now?” It was just so interesting to me—I’m just a person who has an iPhone who took one photo, and then all of a sudden I’m this credible person who’s being called by the BBC and CNN to ask for on-the-ground information on national cable television.

Aside from a handful of big news agencies and TV stations, no one else asked to publish the photo that soon spread across the web.

Haunting Photographs of Plastic-Wrapped Bodies Floating Above the Ground