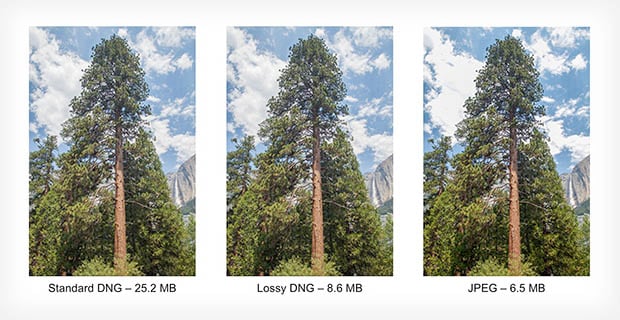 Adobe has officially added lossy compression into the latest specification (1.4) for its Digital Negative (DNG) RAW file format. The new Lossy DNG, which first appeared as a feature in Lightroom 4 earlier this year, gives photographers a middle-ground between the quality of lossless DNG photos and the small file size of JPEG photos.

DNG is an open RAW format competing against the proprietary RAW formats used by most major camera brands. Only a small number of manufacturers have baked DNG support into their cameras so far — Leica and Pentax are two of the big ones — but supporters of the format believe that having an open format is the way to go for storing digital photos safely long term.

The US Library of Congress has even recommended the format as a more suitable for preserving digital images for the long haul, since it’s unknown whether software in the future will still be able to read the proprietary RAW formats used today.

RAW files are huge, and JPEGs are small. Thus, photographers who want to archive higher quality photos are generally forced to store the huge versions of every file. Lightroom Product Manager Tom Hogarty tells DPReview that the new format solves this Goldilocks-esque problem of “too big and too small”:

If you look at the output of a [Canon EOS] 5D Mark II, its Raw files are about 25MB, while its JPEGs are about 6MB. The difference in quality and capability between the two is significant enough that many photographers are happy to put up with the additional demands of the larger files. Lossy DNG allows something in-between the two in terms of size but retains the flexibility in terms of adjusting White Balance and preserving detail. For example, the out-takes from a wedding shoot, that the photographer is unlikely to ever be able to sell or make any money from. This gives them a way of reducing the amount of storage space they need, but they still have the file if they do ever need it.

Adobe’s Lossy DNG uses the exact same compression algorithm as JPEG, but there’s some special mojo that helps the photos retain more quality. Here’s how Points in Focus explains it:

The RAW file is demosaiced, to produce a RGB file similar to a TIFF or BMP. The color channels are then remapped using a 1D perceptual mapping algorithm, so that their values are spread across the full range of possible values. Some noise is added—dithering—in specific places as necessary to insure that the now remapped data doesn’t become blocky. The image is then compressed using the same compression algorithm that JPEG files normally uses.

The result is a file that’s often 1/3 or 1/4 the size of the source file, that retains more fidelity than a JPEG would and has sufficient data to allow the image to be processed to a limited degree but more extensively than a JPEG.

The next milestone for the new Lossy DNG would be for this new format to be an option in digital cameras, giving photographers more freedom in choosing how to save and store what they shoot.

(via Adobe via DPReview)

P.S. Another huge benefit to DNG is that most photo editing programs will open your photo. You don’t need to wait for Adobe to release a software update just to support your new camera’s RAW format like it just did this week.