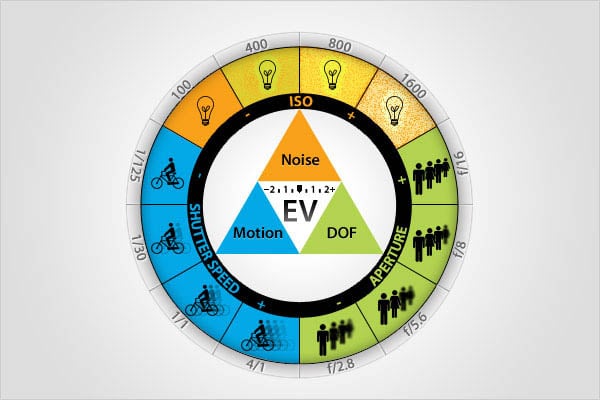 Check out this awesome exposure triangle graphic found in this Exposure Guide tutorial on the fundamentals of exposure:

When these three elements are combined, they represent a given exposure value (EV) for a given setting. Any change in any one of the three elements will have a measurable and specific impact on how the remaining two elements react to expose the film frame or image sensor and how the image ultimately looks. For example, if you increase the f-stop, you decrease the size of the lens’ diaphragm thus reducing the amount of light hitting the image sensor, but also increasing the DOF (depth of field) in the final image. Reducing the shutter speed affects how motion is captured, in that this can cause the background or subject to become blurry. However, reducing shutter speed (keeping the shutter open longer) also increases the amount of light hitting the image sensor, so everything is brighter. Increasing the ISO, allows for shooting in lower light situations, but you increase the amount of digital noise inherent in the photo. It is impossible to make an independent change in one of the elements and not obtain an opposite effect in how the other elements affect the image, and ultimately change the EV.

If you’re just starting out in photography, do yourself a favor and work through the Photography Basics page over on Exposure Guide. It’s a fantastic resource.