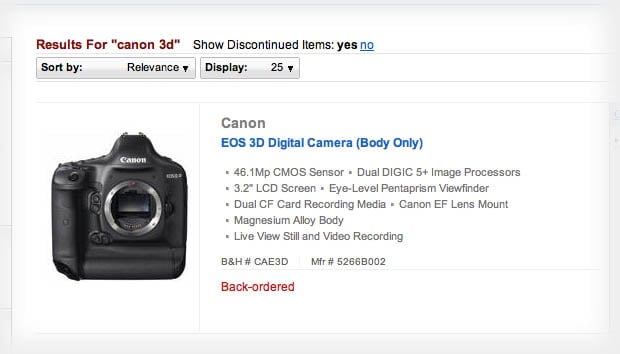 Canon’s rumored-but-yet-to-be-announced 46-megapixel DSLR may be named the Canon 3D after all. While browsing camera store B&H last night, the folks over at Nine Volt randomly decided to search the site for “Canon 3D”. They were surprised to find that the actually returned a result.

Here’s what they saw: 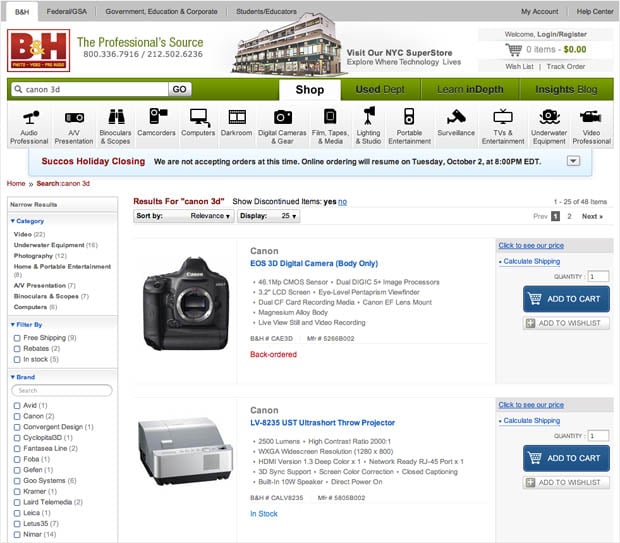 The 3D appeared above a Canon projector, and featured specs that match up with those that are floating around in the rumor mill: a 46.1 megapixel sensor, a 3.2-inch LCD screen, and a magnesium alloy build. The photo may simply be a placeholder image used until an actual product shot is available.

Searching for the manufacturer product number (#5266B002) on Google returns the silver version of the outdated Canon PowerShot Elph 510 HS. Perhaps it’s another placeholder?

Clicking the link led to a error page: 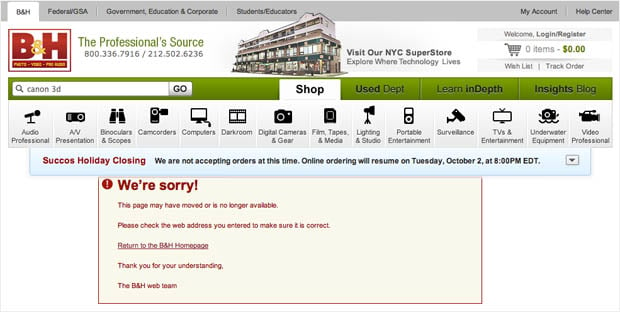 Doing the same search this morning no longer showed the entry. The product had mysteriously disappeared from the results.

Unless Nine Volt is pulling some kind of prank on the photo world, it appears like B&H is getting ready for a launch of this camera sometime in the near future. The rumored date is October 24th, when PhotoPlus 2012 starts in NYC, but usually these announcements are made a little beforehand.

(via Nine Volt Radar via Fstoppers)

Update: Canon Rumors believes that these screenshots are a hoax. They’ve given the rumor a CR0 rating, which is equivalent to “completely ridiculous”.

Update: Nine Volt has confirmed to us that the screenshots are exactly as the website looked. There was no Photoshop trickery involved.

A Brief History of the Polaroid Camera