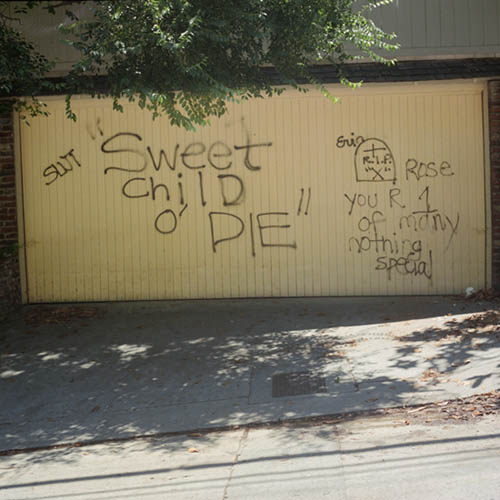 Back in 1992, Los Angeles-based photographer Laura London lived down the street from the singer of the rock band. The singer’s name was Axl Rose. The band was Gunz N’ Roses.

Flash forward twenty years, and London is currently holding a photo exhibition for her project, “Once Upon a Time … Axl Rose Was My Neighbor,” at Coagula Curatorial in LA. The show features photographs from the time London spent living a stone’s throw away from a man who is now considered one of the greatest hard rock singers of all time, along with portraits of Rose wannabes and band photo recreations. One particular image in the show attracted the attention of Rose, and not in a good way — it led to a lawsuit threat.

The photo in question shows a graffitied garage door — reportedly Rose’s — with the words: ‘Sl*t. “Sweet child ‘o DIE” Erin Rose You R 1 of many nothing special.’ While the origins of the spray painted message cannot be determined from the photo itself, here’s the explanation London gave in the caption:

Axl Rose was having a fight with his wife at the time, Erin Everly, and spray-painted graffiti of lyrics of one of his most popular songs ‘Sweet Child 0’ Mine,’ twisted into sick poetry and instead wrote ‘Sweet Child 0’ Die you R 1 of many nothing special.’ I looked at the graffiti and shot a roll of film to document it, even though it is not my usual style of image making. It was just too weird to pass up.

This past Wednesday, gallery owner Mat Gleason received a harshly worded cease-and-desist letter from Rose’s lawyer, demanding that the entire show be cancelled. Here’s an excerpt:

These statements are absolutely outrageous, false, fabricated, and highly defamatory. Mr. Rose never spray-painted anything. Your salacious and inflammatory statements are plainly designed to garner attention and line your pockets with money. They were crafted for the malicious purpose of profiting from our client’s fame and popularity at the expense of his reputation. Moreover, you are accusing our client of criminal conduct (i.e. graffiti) which constitutes libel per se under California law.

[…] If you fail to [comply with the demands] and persist in making such false and damaging statements, our client will immediately commence an action against you for defamation, seeking millions of dollars in compensatory, consequential and punitive damages, injunctive relief and recovery of future earnings.

You can read the letter in its entirety here.

The gallery responded by removing the caption and the description of the exhibition, but is saying that it will not comply with demands for the show to be cancelled. The photo at the center of the dispute is also still for sale. The price: $24,000.

The Pursuit of “Classic” Designs in the Camera Industry