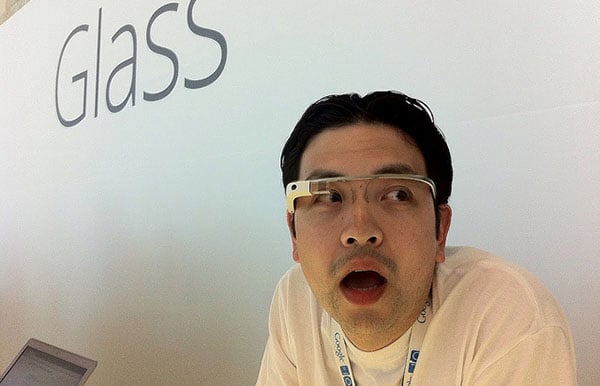 Developers who pre-ordered Google’s Project Glass glasses for $1,500 won’t be receiving them until early 2013, but a number of lucky journalists were recently given the opportunity to take the camera-equipped, augmented reality eye-piece for a test drive. The New York Times’ gadget kingmaker David Pogue writes that the device has the potential to be one of the rare devices that introduces a whole new gadget category to the world,

[…] a few things are clear. The speed and power, the tiny size and weight, the clarity and effectiveness of the audio and video, are beyond anything I could have imagined. The company is expending a lot of effort on design — hardware and software — which is absolutely the right approach for something as personal as a wearable gadget

[…] it’s much too soon to predict Google Glass’s success or failure. But it’s easy to see that it has potential no other machine has ever had before — and that Google is shepherding its development in exactly the right way.

Spencer E. Ante of the Wall Street Journal is enthusiastic about the technology as well, but thinks it still needs a “killer app” in order to be accepted:

After 10 minutes of playing with the glasses […] I could see their long-term potential. The device fit well. It was easy to snap a picture or video without taking my smartphone out of my pocket. It was cool to see the information there in front of my right eye, though a little disorienting. I kept closing my left eye, which was uncomfortable.

[…] What’s really missing, though, is a killer app that could really show the technology’s potential. As Mr. Brin tells it, the glasses are like a less obtrusive smartphone that rids the world of people looking down at their devices while walking on the street. That is great, but it doesn’t seem ambitious enough.

The ability to photograph life hands-free is already something of a “killer app” in my eyes, since it would allow people to snap photos in situations in which even GoPros would seem unwieldy. Google seems to agree, since virtually all of the Project Glass demos and promos up to this point have focused on the device’s potential as a camera.

The spread of smartphone photography shows that the general public wants as-easy-as-possible photos of their lives and memories, so the big challenge for Google is to make its product look great in all aspects: how the device looks while it’s being worn and how the images look when the pop out.

If they can nail both those things, then it stands a much better chance of replacing a huge aspect of how smartphones are currently being used.