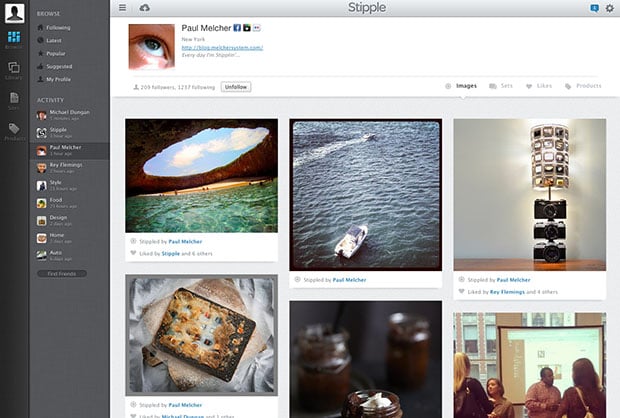 We first covered Stipple last year, when it was a B2B service that was attempting to turn microstock on its head by offering image licenses in exchange for in-image ads. Since then, the company has relaunched as a platform geared towards ordinary folk. In addition to being able to make money from your photos, Stipple now adds a useful layer on top of the images, allowing you to share, caption, and track your photos in ways that aren’t possible with static image files.

Basically, the service uses some Javascript code to add an “intelligent layer” to images, turning them into the static equivalent of YouTube videos. Instead of a photo that you need to download or hot link to share, you can simply grab the embed code by hovering over the image and pressing a button.

Adding photos to your account can be done by providing a URL, automatically importing from a website, through social networking sites, or through the service’s online uploader.

Once the image is in your account, you can find embed codes for it, look up its stats (user engagement, online reach), and add useful information to it that shows up in little overlay bubbles when viewers hover over it. Don’t want to manually “Stipple” each of your photographs? The service can be used on entire websites by simply adding a piece of Javascript code to the bottom of the site. This automatically imports photos on the page, and allows you to manage and track them through your Stipple account.

In addition to these image enhancement features, Stipple is also a photo sharing service in itself. The interface is very similar to what Pinterest has done, and you can like, comment, and share photos directly inside the service itself.

Paul Melcher, the guy behind the photo industry blog Thoughts of a Bohemian, is Stipple’s VP of licensing. He tells us that Stipple has been quite popular with users, having been installed on more than 4,000 websites already and receiving thousands of new registrations on a daily basis.

We asked Melcher what it would take for Flickr to become a competing service. Here’s his reply:

If Flickr changed their embed code, not much would happened. They do not offer advance media tagging nor do they have any image fingerprinting technology. That means that if I “right clicked” a Flickr image and uploaded to my blog, no tags would appear nor would anyone know who took the image. With Stipple, the tags are there, at the right place, along with image attribution and IPTC information.

Stipple certainly isn’t the first company to try and bring the benefits of online video embeds to online photos. We’ve covered a number of them in the past, and in each case the service floundered and disappeared off the face of the Internet.

What makes Stipple stand a chance is how broad and polished the service is. It’s not only designed for image embedding, which could be hard to monetize on its own. The fact that there’s a social networking component built in certainly helps the service in terms of traffic, and the whole monetization component that they started off with should help keep them afloat financially (but they’re definitely not hurting in that regard).

Another attractive aspect of the service is that you don’t need to entrust your data to Stipple servers. Having most of the grunt work done through Javascript rather than iFrames makes it so that if Stipple ever goes under, your self-hosted photographs should still be fine — just less awesome.

P.S. Check out the interview Melcher did regarding Stipple over on APhotoEditor.

How to Survive as Quality Photography Becomes Less Scarce