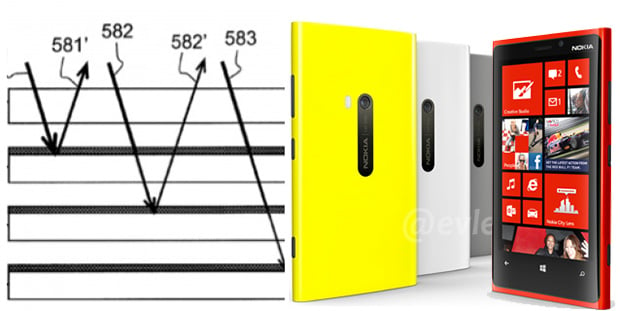 Photos and details of Nokia’s upcoming Lumia 920 smartphone leaked earlier this week, revealing that the new flagship Windows phone will feature a 8-megapixel sensor, a 4.5-inch display, 32GB of storage, and wireless charging via a special pad.

Although the camera specs seem rather pedestrian compared to the 41MP 808 PureView, patents published last month reveal that the company is working on some special sensor tech for future devices. More specifically, Nokia is working on developing camera sensors that use layers of graphene — one-atom-thick layers of carbon — for big performance advantages over existing sensors.

The patent, titled “Sensing of Photons” and published on August 16th, shows a sensor made up of multiple layers of graphene and color filters. Having three layers that detect RGB would allow the graphene to capture a standard full-color pixel — perhaps similar to what Foveon sensors do.

The big advantage to using graphene is that the material only absorbs 2.3-percent of light that passes through. Nokia says that the light can be “remeasured” after it passes through, reflects, and travels backward, potentially doubling the sensor’s light detection efficiency.

In addition to performance gains, Graphene sensors could be easier to make, smaller, and thinner than existing CMOS and CCD sensors — perfect for upgrading the cameras found in phones.

Finally, the fact that the graphene layers absorb so little of the passing light means that the sensors could even be used as a “pre-amp” for existing sensors, doing its measurement on 2.3% of the light while sending the rest through to the “old-school” sensor.

If this technology catches on and makes it into consumers’ hands, we may find ourselves shooting with 41-megapixel phones without any noticeable bulge where the camera’s located (we’re talking about you, 808 PureView). Sadly, there’s no word on the current status of this research, or whether we’ll even see a glimpse of it in action in our lifetimes.

(via USPTO via SlashGear)

A Kitchen Timer That Masquerades as a Friendly Camera Kit Lens