Fujifilm has uploaded a video to its Japanese YouTube account showing its not-yet-announced XF1 (or XP1) retro-styled compact camera. The video shows that there’s a twisting feature that’s used to turn the camera on and off. Turning on the camera involves twisting the lens to unlock it, pulling it out of the camera until it clicks, and then rotating it some more to open up the lens cover. Turning it off involves doing the same things in reverse.

This isn’t the first time this feature has appeared on a Fujifilm compact camera. The X100-esque X10 is also powered on by rotating the lens from the “Off” position (it doesn’t involve pulling the lens out of the body, though). 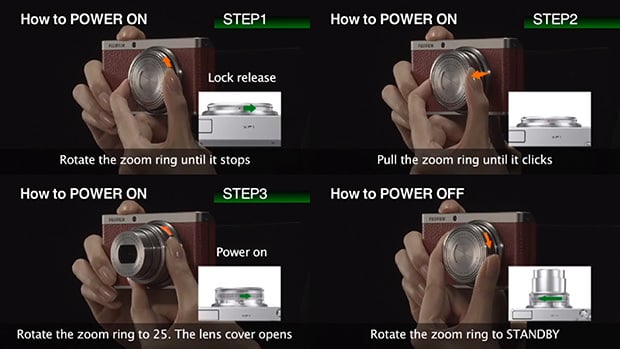 We also see that there will be a leather-colored version of the camera available, in addition to the black version seen in leaked photos.

While we know quite a bit about what the interchangeable-lens X-E1 will offer in terms of specs and price, the rumor mill has been quite mum about the XF1 (we’re guessing the name from the low-res photos and videos that have been leaked so far).