When NASA’s Curiosity rover performed its “seven minutes of terror” landing on Mars a couple weeks ago, the Mars Descent Imager (MARDI) camera had the task of capturing 1600×1200 (~1.9 megapixel) photographs at a rate of 5 frames per second. The camera began snapping away from when the heatshield separated to a few seconds after the rover touched down. The amazing high-definition video above was created with these photographs, showing what it’s like to fall onto the surface of the red planet.


The original frames were “enhanced” with heavy noise reduction, color balance, and sharpening. The video runs at 15 frames per second, so what you see is actually three times faster than what the rover captured in real-time. 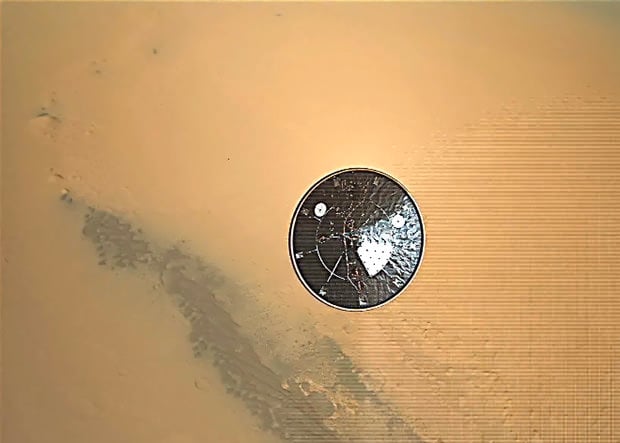 Mars Descent Imager (MARDI): During the descent to the Martian surface, MARDI acquired 4 color images per second, at 1600×1200 pixels, with a 0.9-millisecond exposure time. Images were taken 5 times per second, starting shortly before heatshield separation at 3.7 km altitude, until a few seconds after touchdown. This provided engineering information about both the motion of the rover during the descent process, and science information about the terrain immediately surrounding the rover. [#]

Here some more interesting info about how MARDI works:

An 8 gigabyte internal buffer permits the camera to acquire over 4,000 raw frames (equivalent to 800 seconds of descent, which is many times the actual descent duration). […] The camera is capable of losslessly compressing the images, or applying lossy JPEG compression, in realtime during acquisition and storage, although the intent is to take the images in raw format and apply compression just prior to downlink to Earth. Thumbnail images of 200 × 150 pixels can be created simultaneously with the processing and storage of the realtime images, but will likely be generated again just prior to downlink. Large angular rate motion while the vehicle is descending on parachute, and rocket thruster induced vibratory motion while the vehicle is descending on its landing engines, are likely to blur many of the images despite a 1.3 millisecond exposure time.

Keep in mind that all this photography happened more than 33.9 million miles away from us!