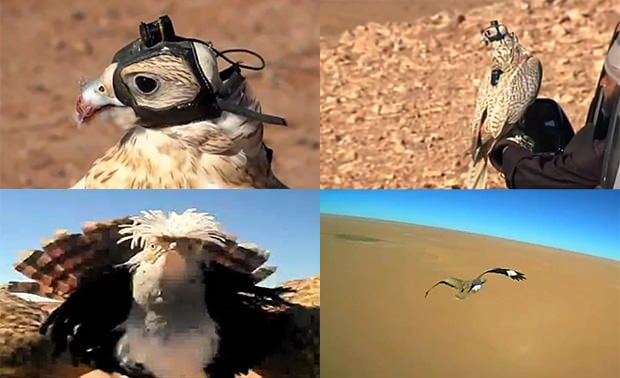 Have you always dreamed of soaring high above the Earth… and dive-bombing other birds? If so, this might be the next best thing: some falconers over in the UAE capital of Abu Dhabi recently created a pint-sized helmet cam designed specifically for their hunting falcon.

They then took the camera-equipped bird out to the desert and set it loose with other birds as prey. The helmet cam successfully captured some fascinating footage of what it’s like to be on the hunt as a falcon.

Like owls and chickens, it’s clear that falcons have image stabilization built into their bodies (just look at the smoothness of the in-flight footage!).

Here’s the video (at 7.5 minutes, it runs a bit long, and the interesting stuff doesn’t actually happen until about 2 minutes in):

Here’s a similar experiment that the BBC did a few years ago:

On a related but somewhat tangential note, if you’ve ever wondered why aerial combat is referred to as “dogfighting” rather than “birdfighting”, here’s the answer:

The term dogfight has been used for centuries to describe a melee; a fierce battle between two or more opponents. The term gained popularity during World War II, although its origin in air combat can be traced to the latter years of World War I. The first written reference to the modern day usage of the word comes from Fly Papers, by A. E. Illingworth, in 1919, “The battle develops into a ‘dog-fight’, small groups of machines engaging each other in a fight to the death.”

Build a DIY Bluetooth GPS Unit for Your Nikon DSLR