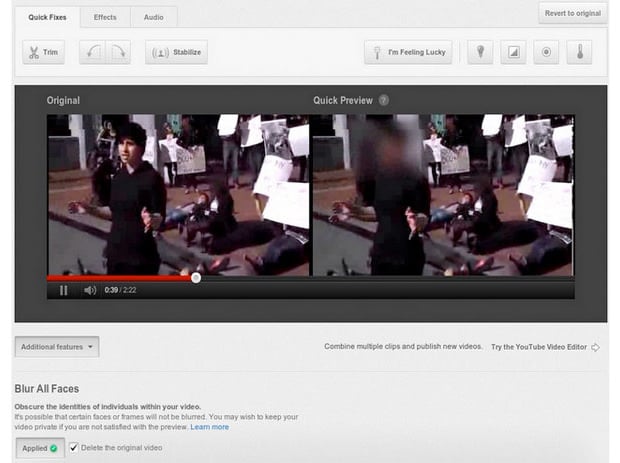 YouTube just announced a useful new feature: an easy face blur option. The announcement says the feature is aimed for news and human rights agencies to protect privacy and identities especially if posting images of activists who may need to remain anonymous or if minors are present in the videos and privacy is a concern.

The announcement also points out the power of anonymity and its relationship with free speech:

Visual anonymity in video allows people to share personal footage more widely and to speak out when they otherwise may not.

Because human rights footage, in particular, opens up new risks to the people posting videos and to those filmed, it’s important to keep in mind other ways to protect yourself and the people in your videos.

This face-obscuring technology could come in handy for photo sharing sites (or software as a batch edit) as well — imagine being able to upload an entire shoot and automatically blur hundreds of faces.

Unfortunately, it appears that the YouTube feature automatically blurs all faces, so even if permissions or releases are not an issue for some individuals, there is no way to select who stays and who blurs. Also, YouTube says the face recognition algorithm may not always properly detect faces; depending on factors like angle, lighting and video quality, some faces might randomly remain.

Is the “Missing Arm” on Russia’s August Vogue Cover Photoshop or Photo Angle?