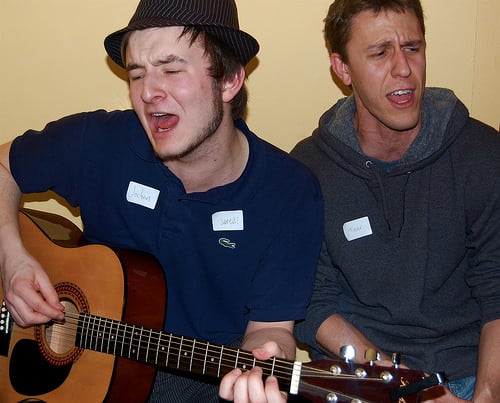 So I’ve been shooting some shows for some of the choral groups on campus at my school, and I’ve started to notice a trend: people make some stupid faces when they are singing. They can range from an approaching sneeze to a full-on O-face.

Now, to the average viewer during a performance, these faces go unnoticed as they aren’t usually held in awkward positons. However, when you take pictures of people singing, you’re freezing whatever face they happen to have when you hit the shutter. So, to avoid making your subjects look like fools, here are some helpful pointers:

Shoot in burst if you have it. This way you get shots as their faces change shape, meaning that if the first one is crap, theres a chance the rest in the burst improve as the syllables pronounced change.

Aim for the “ahhh” syllable. This syllable gives a good shape to the mouth for shooting; a nice, open, singing pose. “oooh” can work as well, just be careful to avoid it when it looks like the duckface.

Avoid sharp consonants at all costs. Things like “thh” and “ff” make for really stupid faces. A general rule of thumb is that if the tongue is involved in the sound, it will look ugly.

About the author: Nick Solarz is an amateur photographer based in Worcester MA. You can find his photography here.

Image credit: Faces we make when we sing the songs we know by What is in us