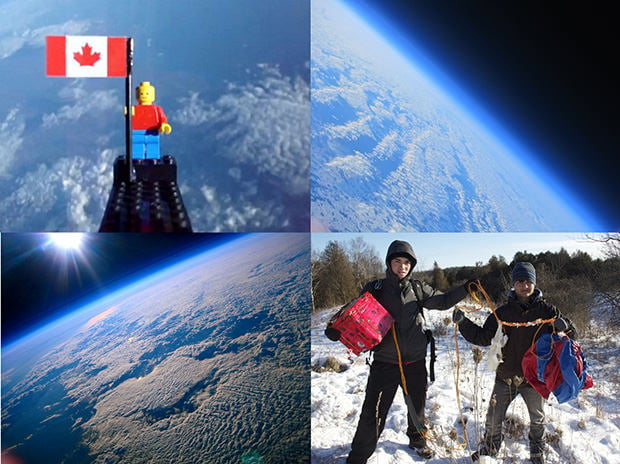 A couple weeks ago, 17-year-old Canadian teens Mathew Ho and Asad Muhammad successfully sent a Lego man and four cameras to the edges of space on a weather balloon and captured photographs of the figurine posing with a Canadian flag at 78,000 feet — three times the cruising altitude of jets. They spent $400 on materials and four months of free Saturdays planning, buying, making, building, and testing:

[…] the two scoured Craigslist and Kijiji for used point-and-shoots. They needed Canons, which can be programmed to take photos every 20 seconds without stopping.

Next they sewed the parachute. “By no means are we, like, seamstresses,” says Ho. “We broke like, what, four needles? It was ridiculous.”

[…] Finally, they assembled the whole thing, carefully carving out space inside the Styrofoam container for the three point-and-shoots, the wide-angle video camera, and a cellphone with a downloaded GPS app. They super-glued their Lego astronaut to a gangplank on the outside, and printed off a Canadian flag for him to hold.

The vessel completed a 97-minute journey and captured plenty of footage and photos along the way. You can view a gallery of the images here.