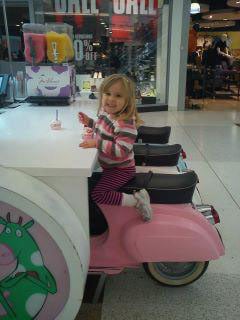 Last Friday, 45-year-old Chris White was at the Braehead shopping center near Glasgow, when he took a snapshot of his daughter Hazel eating some ice cream. He was then confronted by security guards — and later the police — who cited the Prevention of Terrorism Act to explain that it was in their rights to confiscate his phone. While they did allow him to keep the photos, they demanded his personal details. Afterward, White created a Facebook page titled “Boycott Braehead” in an effort to draw attention to the incident.

Around 4pm this evening I took the attached photo of my 4 year old daughter looking cute on the back of a vespa seat at an ice cream bar inside Braehead shopping centre in the middle of a shopping trip. Having just bought her some new jigsaws we were going to go look at some clothes shops but never managed to continue our shopping trip.

Walking down the shopping mall a man approached me from behind as I was carrying my daughter in my arms. He came from behind me, cutting in front of me and told me to stop. That was quite a shock as I am wary of people with crew cuts and white shirts suddenly appearing in front of me, but then realised he was a security guard.

He then said I had been spotted taking photos in the shopping centre which was ‘illegal’ and not allowed and then asked me to delete any photos I had taken. I explained I had taken 2 photos of my daughter eating ice cream and that she was the only person in the photo so didn’t see any problem. i also said that I wasn’t that willing to delete the photo’s and there seemed little point as I had actually uploaded them to facebook.

He then said i would have to stay right where I was while he called the police, which seemed as little extreme. My daughter was crying by this stage, but I said that was fine I would wait and began to comfort my daughter who was saying she didn’t like the man and wanted to go. After about 5 minutes two police officers arrived.

The older police officer was actually quite intimidating in his nature. He said that there had been a complaint about me taking photos and that there were clear signs in Braehead shopping centre saying that no photographs were allowed. I tried to explain that I hadn’t seen any clearly displayed signs and that I had taken 2 photos of my daughter.

As i was trying to explain he said I was interrupting him and that I should remain quiet until he had finished speaking to me. Not wanting to distress my daughter further, and to allow him to finish I let him continue. At one stage i was reassuring my daughter that everything was okay, only to be told I wasn’t listening by the officer.

Once he had finished, i then started to explain again my situation, only for the officer to start speaking again. Apparently different rules of respect apply when someone other than a police officer is speaking. I explained that that far from being aggressive when the security guard came over, the way he approached me was threatening and intimidating. I was told that was my word against his. Although this didn’t seem to be the case when the security guard alleged that I was threatening when I had a 4 year old in my arms and waited patiently for the police to arrive.

The police officer than started to say that there were privacy issues around photographs, to which I said yes and in a busy shopping centre I waited until only my daughter was in the shot. I explained that I was happy to show him the photos although not sure under what authority he could ask me to delete the photos.

He then said that under the Prevention of Terrorism Act he was quite within in his rights to confiscate my mobile phone without any explanation for taking photos within a public shopping centre, which seems an abuse of the act. He then said on this occasion he would allow me to keep the photos, but he wanted to take my full details.

Name, place of birth, age, employment status, address. Had I not had my daughter with me, and the fact that we are trying to bring our daughter up to respect and trust police officers, I may have exercised my right not to provide those details. My view is that up until that stage the police were using powers their stop and account powers. I had done that so would have been within my rights not to give further details, however I chose to give the details.

The police officer also said that the security guard was within his rights to now ask me to leave Braehead Shopping Centre and bar me from the premises which I was happy to oblige.

Four things that are truly ridiculous the whole photo situation. How many people have taken photos of their children in Build-a-bear or on rides and attractions in Braehead? The police officer even thinking of making reference to the Prevention of Terrorism Act; wondering how many shoplifters got away while my act of terrorism was being dealt with; and the fact that i was clearly shopping and intended to continue shopping at a time when retail sales are at there lowest for over a decade. I guess Braehead shopping centre must be bucking the trend! [#]

Since Friday, the page has since received more than 10,000 “likes”, and the story has been reported by quite a few news outlets, including BBC News.

Thanks for sending in the tip, David!