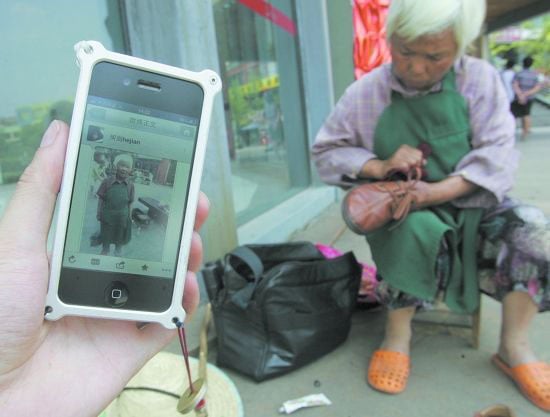 The power of the Internet is awesome when it helps reunite people with lost photos, but it’s even cooler when it uses photos to help reconnect people with relatives. That happened recently with a 71-year-old shoe shiner in China named Shufang Zhong. Zhong’s daughter had moved to a far away city five years ago, and although they could speak on the phone, her daughter desperately wanted to see her face. The problem was, Zhong had absolutely no Internet access and no idea how to reach her daughter.

On June 24th, Zhong noticed a man using an iPad and begged him to help her search online for her daughter. There wasn’t Wi-Fi in the area, so the man snapped a photograph of Zhong instead and uploaded it to Chinese microblogging service Weibo (similar to Twitter). Within just a few hours the image had attracted news organizations, celebrities, and over 100,000 “retweets”, and on June 27 the daughter came across the photo online and saw her mother’s face for the first time in five years.

(via Chengdu Daily via VentureBeat)

Update: After some further digging, it appears the story is different than how we initially reported it (and how our source reported it). We’ve updated the post accordingly. Sorry about that.

The Negative Effect: A Documentary About Film Photography Lovers

Jeff Wall: “I Begin by Not Photographing”