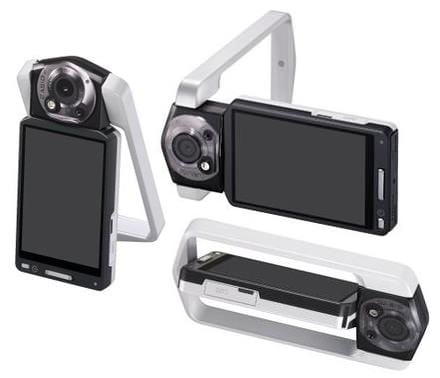 Setting a new Guinness World Record might be a difficult task for us humans, but is apparently much easier if you’re a camera. A bizarre story that emerged this past week was that Casio’s swivel-crazy Tryx has been awarded a Guiness World Record for being the “Most Adjustable Digital Camera“. The description of the world record reads like something out of a press release:

Instead of a traditional block camera body, the 3-in touch screen LCD on the Casio Tryx digital camera is swivel-mounted inside a frame, upon which the lens and flash is affixed. The screen pops out of the frame and can be swivelled 360 degrees around and through the frame in landscape mode, and swivelled simultaneously 360 degrees on its frame-attached stem in portrait mode, creating an almost limitless number of shooting positions and angle combinations. [#]

Take notice, camera makers: if you want to land a world record in the Guinness Book, simply make a camera that swivels in a bazillion directions!

Most adjustable digital camera (via Cameratown)

All the Film Photographs in the World Would Cover 4,000 Square Miles