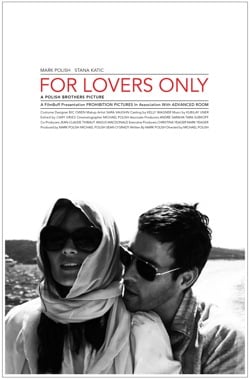 If you look at the Top 100 Movies chart in the iTunes Store, you might not notice anything out of the ordinary, but one of the movies (#43) is actually a no budget film shot using a single Canon 5D Mark II. For Lovers Only” is a romance filmed by Mark Polish and Michael Polish — known as the Polish brothers — over the course of just 12 days with a single actress (Mark himself played the male lead). The film has already generated over $200,000 in profits after being spread through word of mouth via social networks.

The brothers said that their hotels and some meals were comped; they shot and edited with equipment they already owned; and they don’t consider the few grand worth of meals, taxis and the like to be part of an actual budget. “There was not one dime that came out of our pocket specifically for this movie — besides the food we ate, but we had to eat, anyway,” Michael said.

In the end, Michael and Mark even had to make up some names for the film’s title sequence, which they wanted to stretch out to a reasonable length in order to fit the score that had been written by their friend Kubilay Uner. [#]

This is a great example of how the landscape for movie making, distribution and viewing is rapidly changing, allowing anyone armed with a prosumer DSLR and a whole lot of talent to potentially strike it big.

How the Polish Brothers Are Raking It In With a Stealth, No Budget Movie (via planet5D)