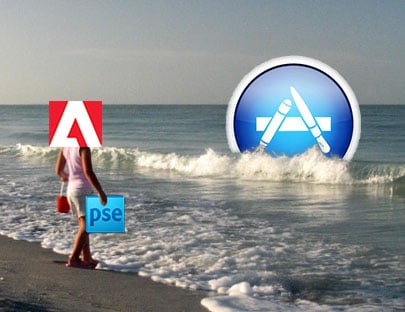 For the first time ever, an Adobe program is available through the Mac App Store. Yesterday, Adobe began selling Photoshop Elements 9 there for $80, a generous 20% off the regular $100 price for the boxed version. It’s a pretty big deal, because Adobe — along with Microsoft — is a company that would love to keep its software out of Apple’s App Store. It generates significant profits by selling its popular programs in the traditional boxed format, while businesses that sell through the Mac App Store must fork over 30% to Apple (which may soon become the most valuable company in the world). This news shows that Adobe is at least testing the waters, and may eventually expand its offers in the Mac Store to reach Apple’s rapidly expanding customer base.

Music Made Entirely from Camera Sounds

A Cheap and Simple Way to Weatherproof Your DSLR