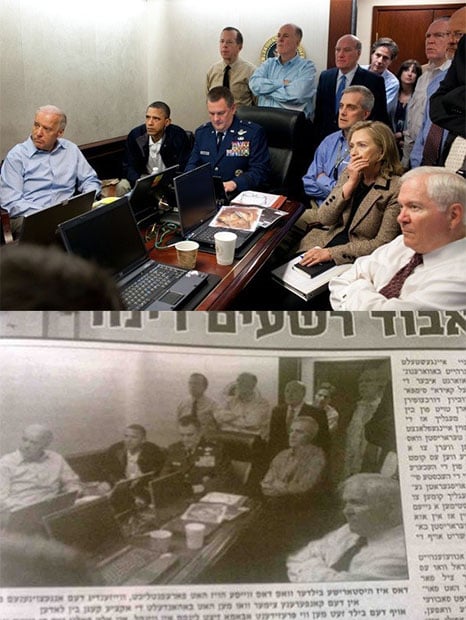 Pete Souza’s iconic photo of Obama and his national security team in the Situation Room has become extremely well known in the span of a week, so it’s unlikely that any reputable media outlet would dare alter the photo in any way — but that’s exactly what one newspaper did. Orthodox Hasidic newspaper Der Tzitung has a policy of never publishing photographs of women, and decided to publish Obama’s situation room photograph with Hillary Clinton and counterterrorism director Audrey Tomason Photoshopped out of the frame.


The photograph was published to the White House Flickr stream with the line, “The photograph may not be manipulated in any way […]”. After the story blew up across the Internet this past weekend, the newspaper released a statement apologizing for their actions:

In accord with our religious beliefs, we do not publish photos of women, which in no way relegates them to a lower status… Because of laws of modesty, we are not allowed to publish pictures of women, and we regret if this gives an impression of disparaging to women, which is certainly never our intention. We apologize if this was seen as offensive.

You can find the rest of the statement over on the Washington Post.

(via Failed Messiah via Imaging Insider)