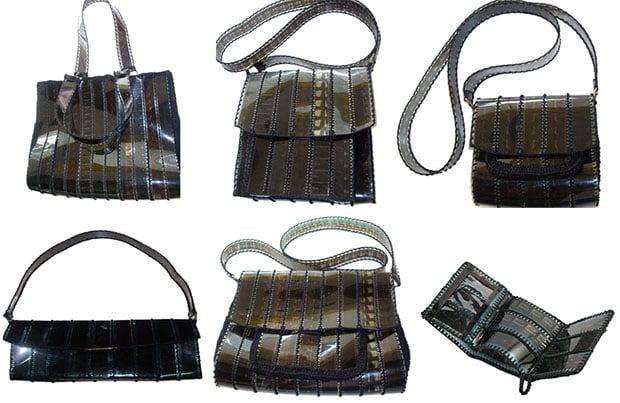 Julie Lewis saves the 35mm film of Hollywood movies from destruction after they’re done running in theaters by upcycling them into unique handbags and wallets. The 100% polyester films are sometimes from a mix of different movies, or sometimes from the same popular film (e.g. “Twilight”).

The movie film is backed with a clear polyester film (therefore it is actually two layers of polyester film for increased durability) so you can see the images when held up to the light; but when the bag is closed the contents will not be visible, although you can see your cell phone when it rings! Remember that the films have previously been exposed to hours of bright light and have gone round and round on film spools in a projector, so durability is beyond extreme, and exposure to light or heat or rain is not a problem…trust me, I live in Portland where it rains 42″ per year!! [#]

After creating prototypes, Lewis sends the design and film reels to the Philippines, where women in a coop she founded make a living by hand-crocheting these bags with mercerized yarn. You can support by the project by donating to it through Kickstarter. A pledge of $50 will get you a film wallet, while $100 will land you a large tote.

Handbags made from 35mm Pre-run Hollywood Movies (via Boing Boing)