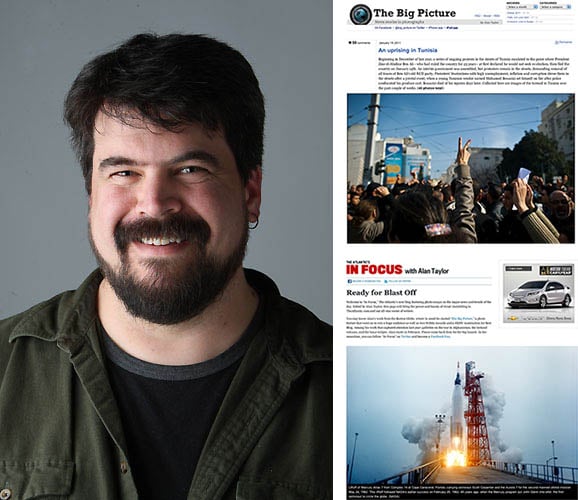 After Alan Taylor started “The Big Picture” photo blog over at the Boston Globe in 2008, it quickly became one of the most popular sections of the website. In addition to starting a large format photo blogging trend among news organizations, it has also won two Webby Awards and a SXSW nomination for “Best Blog”. Taylor announced yesterday that he will be leaving “The Big Picture” to start up a new photo blog over at The Atlantic called “In Focus“. His last post at The Big Picture will be on January 21st, 2011, and In Focus will be officially launching in February.


Regarding the reason behind the move, Taylor explains on his blog,

Why the move? Simply stated, I want to do more with the format. I see many opportunities ahead, and have wanted to do more with the blog for a long time, but have often been constrained by time. As anyone who knows me can tell you, working on the blog was always a passion, but was never my fulltime job. I was hired by the Globe over five years ago as a Web Developer, and part of the agreement to let me run the Big Picture was that I kept doing the other web development that needed to be done. I agreed to that arrangement, and tried my best to make it work, but in the end, it was often unworkable – one or the other job would suffer when there were crunch times.

I wanted the opportunity to do this – telling news photo stories – as a fulltime job, and the Atlantic has offered that to me, for which I am grateful. I also think the Atlantic is a better overall fit for the type of international, wide-ranging storytelling I’ve practiced over the years. The Globe has been a good home and a great platform for over 425 entries since 2008 and I am truly grateful, but I’ve chosen to move on now, and really hope you’ll come along and see what I’m up to. I feel very fortunate for what I’ve been able to accomplish to date, and for the opportunity given to me now. I really can’t believe this is going to be my fulltime gig!

If you’ve followed PetaPixel for some time, you’ll know that we often tweet links to photo essays over at The Big Picture, and that we also interviewed Taylor back in 2009. Luckily for us, The Big Picture will continue even after Taylor’s departure, meaning we’ll simply have a new photo blog on the web sharing awesome photography!