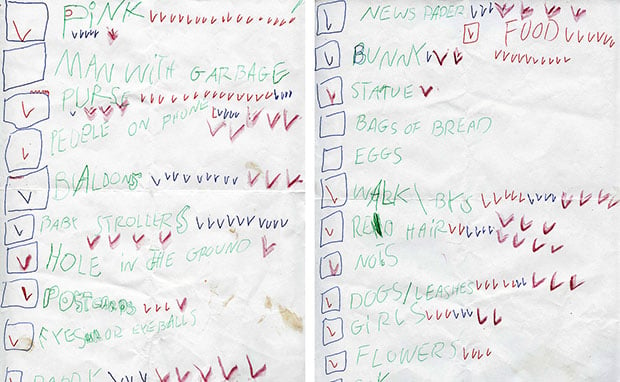 When American photographer Alex Soth arrived in the UK earlier this year to work on a commission for the city of Brighton‘s photo biennial, he was told by the customs officer at the airport that he couldn’t do his photography work without a work visa, and that getting caught might result in two years of jail time.

Instead of going ahead with the project anyway or calling it off, Soth decided to hand his camera over to his 7-year-old daughter Carmen. The duo strolled around Brighton for a few hours each day, with Alex directing many of Carmen’s photographs while Carmen looked to check off entries on the shooting list she made (shown above).

Once shooting was complete, Soth edited the 2,000 photographs that his daughter made into a cohesive collection for the exhibition. When asked whether he thought the photos were any good, Soth responded,

Yes, I think they could stand alongside any other professional work. I showed them to some students without telling them who’d taken them, and they were impressed. One observed that ‘they were from a uniformly low perspective’, which made me smile.”

Martin Parr, the guest curator of the exhibition, was hesitant about the plan at first, but ended up calling Soth’s solution “brilliant”. As the chef Gusteau famously says in Ratatouille, anyone can photograph!