The cute photo above of a surprise photo booth proposal is making its arounds around the Internets right now. Angela writes on her blog,

These are the pictures from when we got engaged. I have no idea in frames one and two and am really confused in frame three (lets never make that face again!) and really surprised in frame four.

Turns out the idea of popping the question unexpectedly in a photo booth in order to capture the resulting (priceless) expression is quite popular.

For the above proposal, Michael created a Flickr thread asking other Houston residents if they knew of any nearby photo booths. Needless to say, they came through, and mission accomplished. Later on, Michael included the Flickr thread in his wife’s scrapbook.

Kaylen writes the following about the above proposal:

I was sitting on his lap as I fed the bills inside the machine. The first picture is cute. The second picture is awkward because he’s shifting his weight to get into his pocket and I have to move. The third picture? Well… 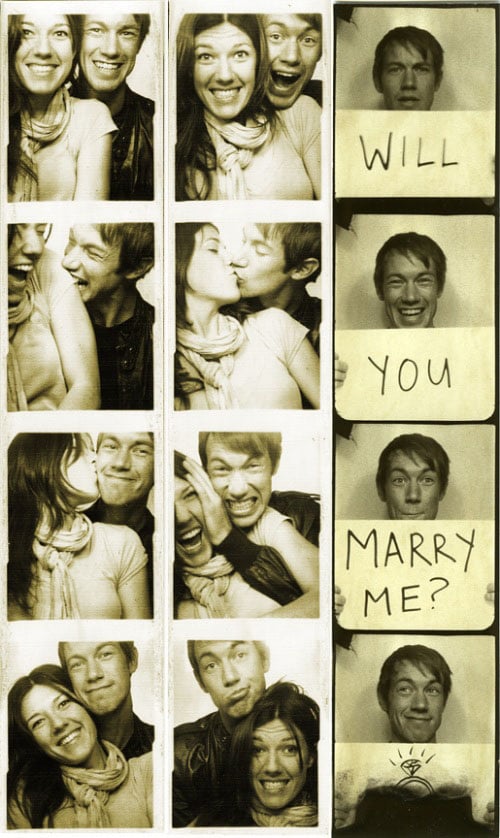 Melody writes on her blog:

Derek lured me into a photobooth to take some fun photos, little did I know, that he had already taken pictures with proposal notes! When he handed me the photobooth strips for safe keeping, he had slipped the proposal in there. When I looked at it I just about fainted. First of all, I had never told him that before I ever even met him I used to say that a photobooth proposal would be the BEST way to get engaged! And second of all, how stinking romantic. I mean, my goodness. Does he know me, or what?! Truly a dream come true. After much screaming and crying (all happy), I said “YES!!!” 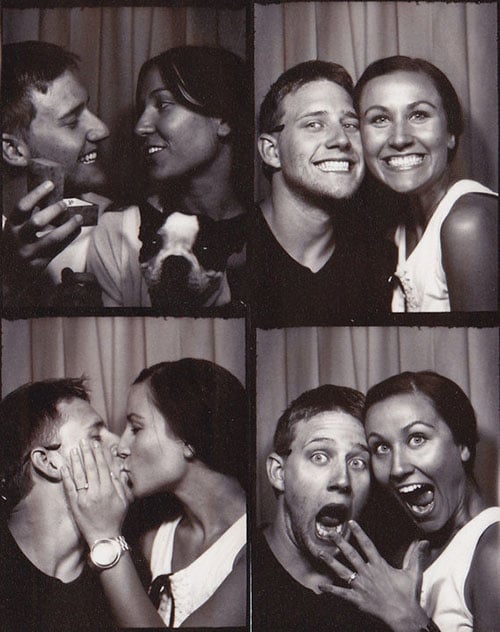 Jenna writes on her blog:

I’ve been a little MIA from the blogging world this past week because I got engaged!!! In a photobooth at the Ace Hotel, none the less. I was completely surprised! It was perfect!

There you have it guys: a possible idea if you love photography and memory-making just as much as you love your girlfriend. For the ladies out there, if you want to perform some Inception, just link your significant others to this post!

Update: Do you have a photo booth proposal photo yourself or know someone that does? Link us to it in the comments and we’ll see if we can include it in this collection!