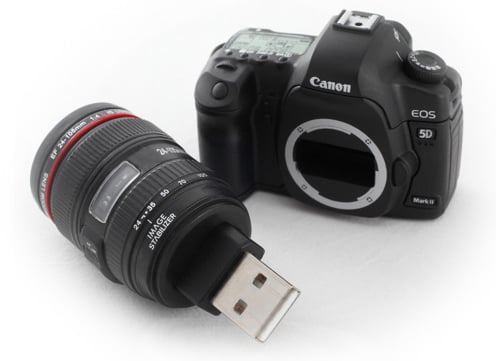 This might be old news for some of you, but I just came across it so I’m guessing many of you haven’t seen it before either. This is a 4GB USB drive that looks exactly like a miniature Canon 5D Mark II, with an EF 24-105mm lens as the drive, and the camera body as the case.

You can find them on eBay by searching for “canon 5d usb“. These little things will set you back about $94 apiece, including shipping.

Don’t need that much power in a USB drive? There’s also a 2GB flash drive that looks like a Canon 450D (AKA Rebel XSI). It actually costs more ($110) and seems to be a bit more rare. The USB drive is also in the body rather than the lens, and it comes with a kit lens rather than a nice L lens:

Seeing as the lens ship from Hong Kong, Canon probably doesn’t have anything to do with these lenses, just like the Canon 24-105 coffee mugs that appeared when the Canon L lens mug became a crazy Internet hit.

Anyhow, if you want to say you have a full frame USB drive and don’t mind spending semi-big bucks for one, this is the way to go.

Top 40 Nature Photographs to Be Auctioned for Earth Day