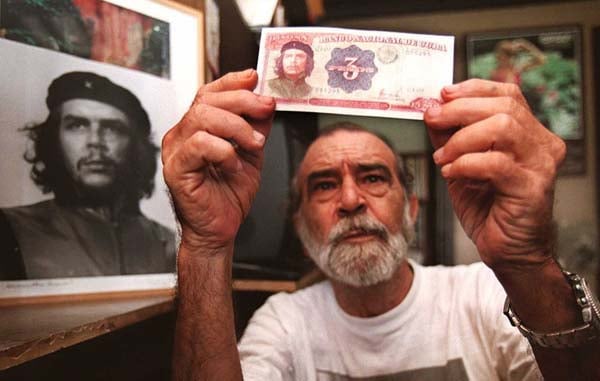 Fifty years ago, Cuban photographer Alberto Díaz “Korda” Gutiérrez took a picture of Ernesto “Che” Guevara at a funeral with a 90mm lens on a Leica camera. 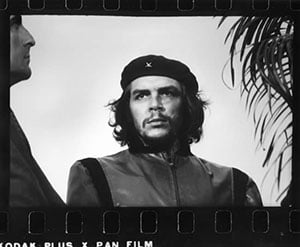 Korda was on assignment as a photographer for the publication, Revolucion. He snapped the photo on a whim, capturing Guevara’s intense, upward gaze in a brief moment. Korda later told interviewers, “It was not planned, it was intuitive.”

A fashion photographer by trade, Korda returned to the darkroom and cropped the originally horizontal photo in order to draw attention to the now iconic steely visage of the leader.

However, at first, Korda’s photo fell to the wayside, and was not published for another five months until it was run as a largely unnoticed file photo.

Seven years later, following Guevara’s death, Fidel Castro requested a photo of the leader on a poster, which was printed on a poster in Italy. Demand for the image rose in the commercial market as well, and the Italian businessman who produced the first print went on to sell over a million copies without artist attribution. 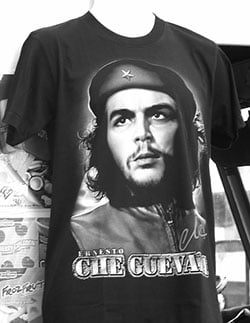 Since then, the image has become one of the most widely reproduced images in history, establishing a cultural memory and a posthumous brand.

According to the Observer, Korda’s work, at the time was not legally protected since Cuba did not recognize copyright. This meant that anyone and everyone could use the image, which contributed to the photo’s worldwide proliferation and iconic quality: the image itself has become a brand, reprinted on clothing, banners, and even on Cuban currency.

Korda received no compensation or royalties from his image.

The photographer eventually sued Smirnoff in 2000 for what he believed was a fundamental violation of Guevara’s political beliefs and an insult to his memory when the vodka company used the image in a magazine ad. Korda won, and the case also awarded him rights to his image.

In recent years after Korda’s death in 2001, Korda’s daughter, Diana Díaz, has launched copyright battles against companies she feels also abuse the image for use in advertisement. A notably ironic twist: Díaz agreed to sell licenses to “Che” branded products (the clothing, berets, etc.) in order to finance her legal pursuits.

Nevertheless, during his suit against Smirnoff Korda stated,

As a supporter of the ideals for which Che Guevara died, I am not averse to its reproduction by those who wish to propagate his memory and the cause of social justice throughout the world…

Díaz’s copyright suits are similar to the AP’s case against artist Shepard Fairey, which addresses the use and reproduction of a photographic image to use as a marketing brand without the photographers’ consent.

What are your thoughts on the use and copyright status of this iconic photograph?