In a post published on their blog yesterday, Tumblr revealed some interesting data on cameras and Canon lenses uploaded to the blogging service, presumably harvested from the EXIF data of each photo.

While much of the data reflects what we know about camera popularity through other means, like Flickr’s Camera Finder and Amazon’s bestselling list, there are certain bits and pieces that we found interesting and would like to highlight.

First, take a look at the chart of cameras sorted in descending order of popularity: 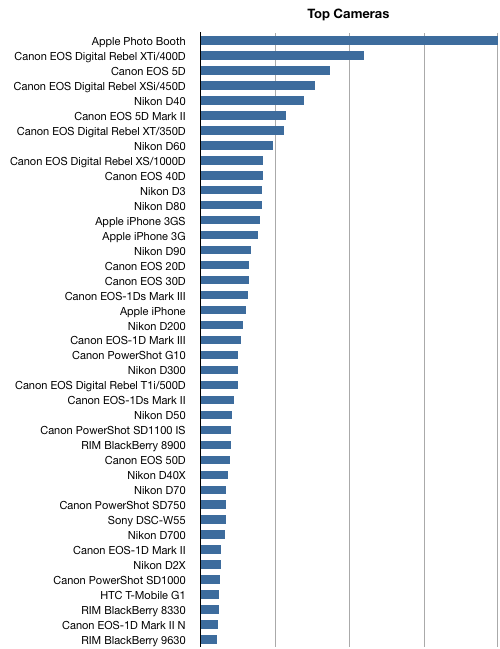 Aside from the fact that people seem to love posting Photo Booth images to their Tumblrs, what caught my eye was the fact that high-end Canon DSLRs (i.e. Canon 5D) seem to be dominating the prosumer lineup (i.e. Canon 40D). On Flickr, all the prosumer DSLRs except the 10D and 50D are represented more than the 5D. Not sure why Tumblr doesn’t reflect the same thing, since photographers more serious about photography seem to gravitate towards Flickr rather than Tumblr.

Like on Flickr, the 50D lags behind the 40D significantly, showing that photographers (myself included), really didn’t see much of a reason to upgrade, and that new purchasers might have opted for a new or used 5D instead.

I think the lens chart that was posted is a bit more interesting, especially since Flickr doesn’t have a corresponding “Lens Finder”:

Here’s my main question: Why on earth is the Canon 50mm 1.8 more represented on Tumblr than the Canon 50mm 1.8 Mk II? The original 50mm 1.8 was discontinued in 1990, and is rare enough nowadays to be selling on eBay for more than double the Mark II, which you can purchase cheaply left and right. Maybe they’re not as rare as we think, but are instead simply being hoarded by photographers who prefer it over the plastic Mark II?

If anyone has any theories or answers to these points that we’ve brought up, let’s discuss them in the comments!

Customize Your Bokeh with the Bokeh Masters Kit

Nikon Cameras May Soon Include Email