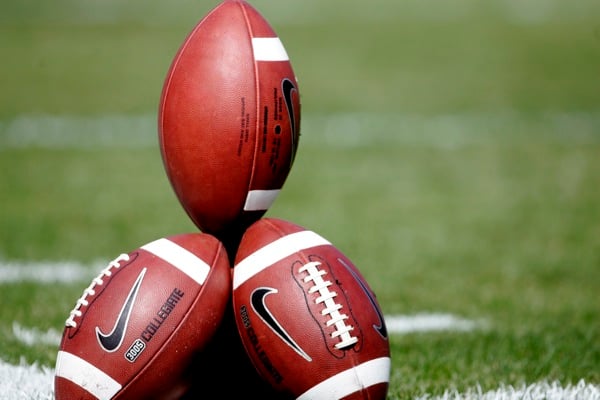 The football season may be halfway over, but there’s still time left to gear up and hone your skills in time for holiday bowl games.

Whether it’s the Super Bowl or the local high school homecoming, anything can happen during a football game. Miracles and heartbreak unfold on the field. The stands are alive with cheering fans led by cheerleaders and mascots. The band trumpets the team on.

And the sideline photographer gets the best seat in the house to observe and capture these moments.

Football is probably one of my favorite sports to cover. I covered the UCLA football team for four seasons, through their ups and downs (both usually against USC) and across the country. Along the way, I’ve compiled a few tips that I’ve passed along to my fresher staff members.

Whenever the team practices, you can too.

If you have access, practice a great time to get a feel for the pacing and feel of the game.

But better yet, you can get a behind-the-scenes look at the players and the coach. Get a sense of the overall team dynamic–which leads us to our next point.

Particularly if you are a team beat photographer, it’s essential to at least be familiar with your team’s players, their role in the game. Which notable players are on the O-line? Who’s the 2nd string quarterback? Are there any potential rising stars on the team?

Knowing who will do what, and when, will not only help you get better coverage during play time, but sometimes you can capture more intimate pre-game and post-game moments. 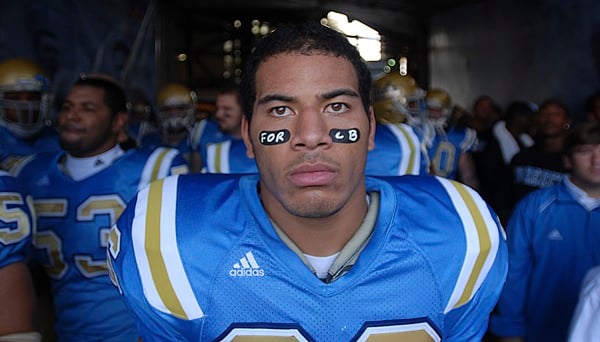 I took this photo of UCLA tail back Kahlil Bell right before he exited the tunnel to play his final college football game against USC last season. Aside from being a gauntlet game against USC, Bell’s expression reflects the personal significance of this game as a senior player.

It’s also a good idea to do your research about the other team. What are the pregame predictions? Are the players evenly matched? Team or personal rivalries?

There’s this great Daily Bruin archive photo from an old UCLA vs. USC game. A Bruin player is lending a hand to the Trojan sitting on the field after a play, but the latter responds by defiantly flipping him off.

There’s no dress code, but it is a good idea to dress sensibly while shooting.

Wear comfortable clothing and shoes with good traction.
You might find yourself running more yards than the star running back, not only to get the shot but especially if you’re covering a game that has TV coverage. Television crews get priority access to the sidelines (they make the big money, usually), and major networks almost always have a large dolly truck that runs up and down one side of the field. Mind your step, watch out for cords, and be ready to run if you’re passing the dolly (of course, you could always shoot from the other side of the field, sans dolly).

Check the weather.
Even when I was covering games at the Rose Bowl in sunny Southern California, the nights could get a bit drafty. Layers come in handy. Also, you’ll know if you should come prepared with a poncho and protective gear for your camera.

Optionally, knee pads are a good idea. Your body will thank you.

Finally, wear long shirts, please, or a belt at least. Because plumber’s cracks are not limited to that vocation.

4. Pack Wisely, and Mind the Monopod.

Most professionals use two to three camera bodies paired with different lenses. I’m probably at least 50 pounds lighter than the average football photographer, and my budget is proportionally smaller, so I usually carry two bodies and a monopod. Two bodies are always better than one, especially if one tweaks out. You’ll have a media room or photographer’s area at most college or pro venues to stash the rest of your gear.

And finally, mind how you carry the monopod. It can be cumbersome running down field with a 300mm lens over your shoulder, but make sure you know where (or at whom) your monopod is pointing. Terrible accidents can happen (I know this for a reason; sorry, guy!).

In most games, photographers cannot stand between the two 20-yard lines on each side of the field, since the team, coaches, and officials use that area. The area between the 20-yard line and the goal, as well as the entire end zone might seem constrictive, but they’re actually the most ideal places to be.

I like using the 300mm or a 400mm lens primarily, so I tend to camp in the end zone, maybe venturing up the corners and sides every once in a while. Up-field from the offense, I’m almost guaranteed to get some good face shots or action in the frame, since they are headed my way. 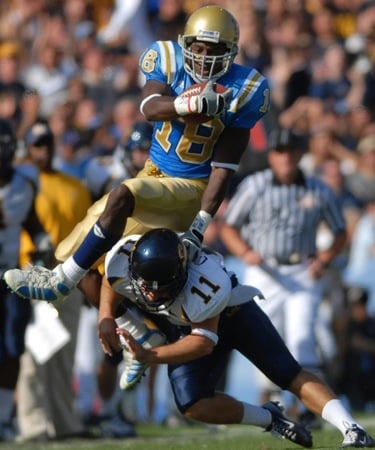 On the flip side, shooting from behind the team with the ball can yield some great defensive moments too: turnovers, interceptions, not to mention a great angle of the quarterback dropping back for a pass or pitching the ball to a tail back. 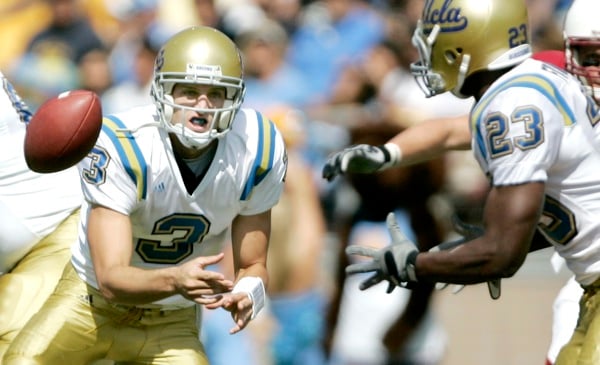 If you follow the quarterback, you follow the ball. Learn to read his body language. If he drops back in the pocket and looks around, he’ll likely pass. If he immediately runs back, he’s likely to hand it off. If he hesitates in the pocket, get ready for a sack or for him to rush.

In a lot of games, a lot of action takes place away from the ball. While that one player has the ball, the other 21 guys on the field are scrambling desperately to do something. Not to mention coaches yelling, other players on the side lines, field officials running about. I smell a photo op.

In the same line of thought, there’s more going on at the stadium than just the game itself.

There are wild fans, families, 70-year-old school alumni, retired players, the marching band, the mascot and, of course, cheerleaders. Try taking photos that capture the spirit of the game, or even the environment at the game, the sunset or snow over the stadium.

A few hours at a football game can yield a cohesive photo story.

It’s easier said than done. It’s hard to capture faces, action and emotion in one shot: 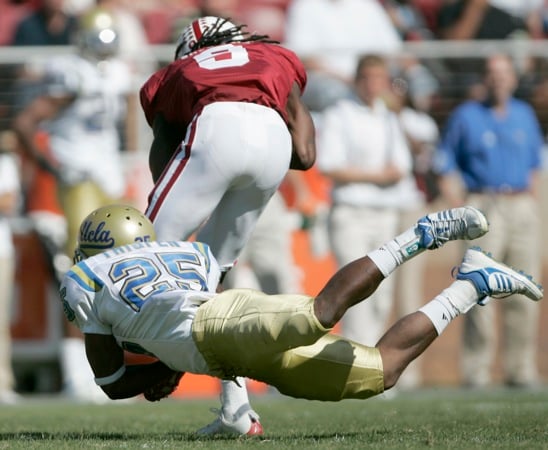 Woops. I was on the wrong side of the field for this shot. It was a great moment, but a bit pointless since I have no faces. Great photos don’t always have to have faces, but faces do add a lot to the image.

Not all good shots need to hit everything on the list, either.

9. Good Crop, Bad Crop: Use Cropping to your Advantage.

Cropping a photo can make or break it.

I’m personally a fan of really, really tight crops for football photos. I like to find where the peak action is occurring and home in on it. 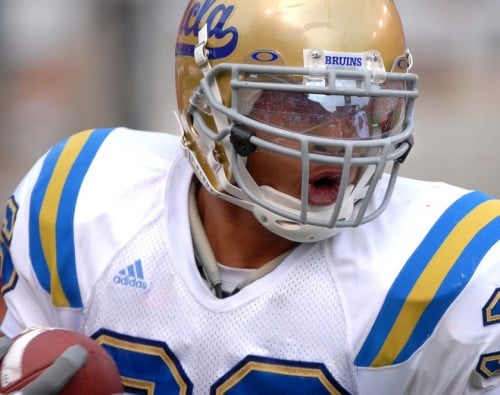 This was the initial crop I made of this photo. I wanted to emphasize the fact that the player is carrying the ball and that there is a cool reflection off his visor. 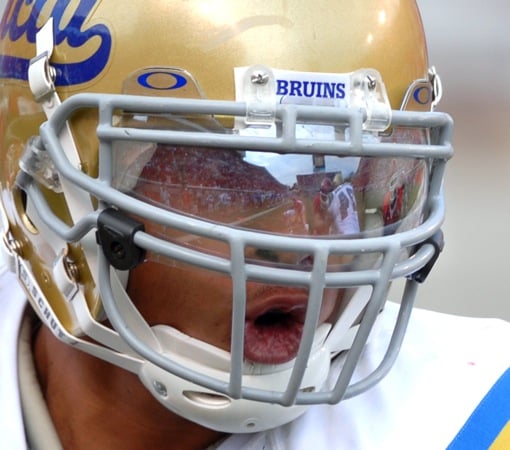 However, I sacrificed the ball in the shot to draw closer attention to the details on his visor, which ultimately make this photo stand out from any other ball-carrying photo. In the reflection, the entire field is visible, from the blocker in front of the player to the tackler about to make a stop.

At the same time, it’s important to be aware of the empty space in the photo, which gives the subject breathing room and a sense of motion. 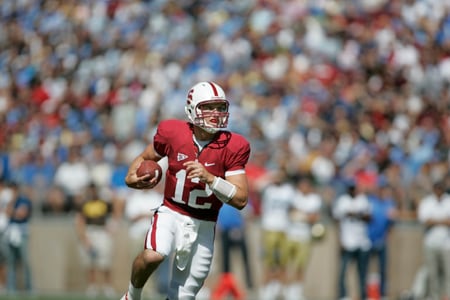 This uncropped photo is not particularly interesting, but cropping might help add dynamism to the moment and emphasize the quarterback’s expression. 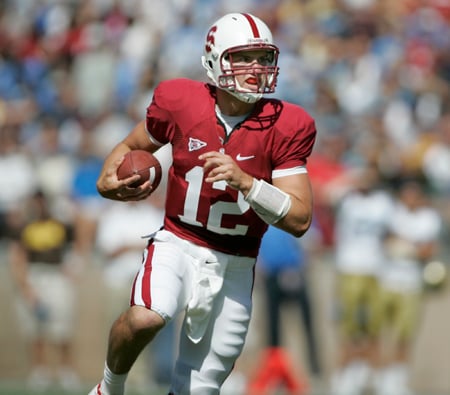 This crop is a little better, but badly composed. Though the player’s head is in the upper third, the action is killed because he’s placed at the dead center of the photo. Also, the crop is still too wide, since his feet are awkwardly not in the frame. 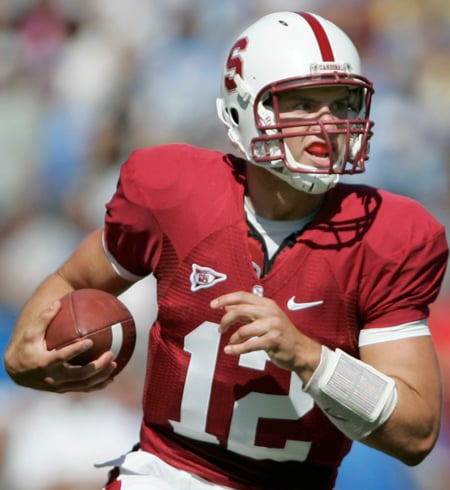 This crop is probably worse than the previous crop because it’s too tight. The motion is killed and the photo is claustrophobic because there simply is not enough empty space for him to visually move into. 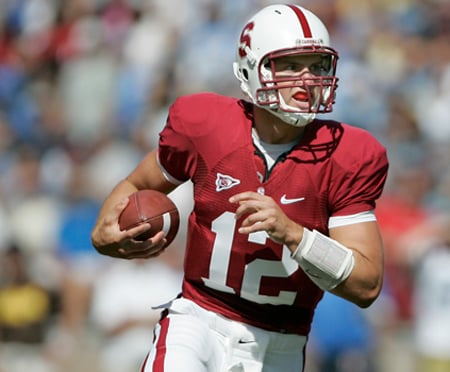 I would lean more towards a crop like this, where there is space on the left, where the player is moving from, and on the right, where he is moving into. I left a little of his right leg in there as well, to preserve the sense that he’s running.

If you are shooting for a publication, informative captions are essential for marketing and presenting your final products.

Generally, I use captions to contextualize the image, and to explain who, what and where the photo is taking place. I usually try to at least include a date, locale, and both team names.

Back to the photo of Kahlil Bell in the tunnel:

It may not be immediately obvious who, where, why or what he is doing in this photo without an explanation.

However, couple the photo with a quick caption underneath, and you’ve got an emotional context and story which adds depth to the image.

UCLA tailback Kahlil Bell pauses at the tunnel entrance at the Rose Bowl before his final college game against USC, Dec. 6, 2008.

From preparation to post-production, covering the football beat can be challenging but extremely rewarding.

If you’ve got tips of your own tips, suggestions or questions, leave a comment!

Interview with Alan Taylor of The Big Picture