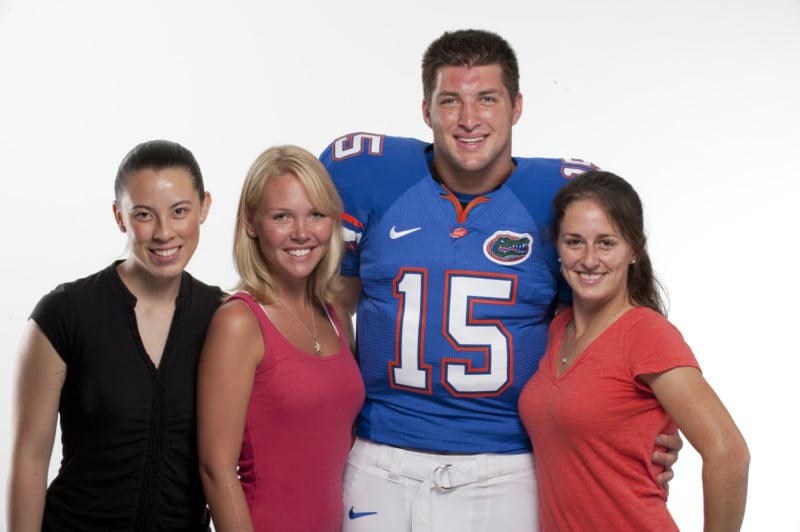 There are certain people that seem to play a consistent role in your life. I’m not talking about friends or family — being part of your life is in their job description. I mean people that seem to always be around. People you know in passing. A name that keeps popping up. A face you recognize from days gone. For me, that person is — oddly enough — Tim Tebow.

I first heard the name Timmy Tebow my junior year at Nease High School in St. Augustine, Florida. Our football team was consistently mediocre until that year when a state championship linebacker transferred to Nease to play quarterback. Suddenly, the Nease Panthers were making every sports headline and winning games with style.

I didn’t know much about him past his seemingly super human athletic ability. He and I shared a morning gym class, and I remember watching him and the other football players lift weights and train. He seemed to have a gear that the other players simply didn’t. He was bigger, faster and most certainly stronger.

At pep rallies the fresh-faced sophomore would smile widely as our football coach, Coach Howard, would list Timmy’s numerous accomplishments. He was breaking school records left and right and shining a light on a once forgotten football program.

Then I enrolled at the University of Florida and halfway through my freshman year watched on television as Timmy Tebow announced his commitment to play football for the Florida Gators.

I ran into him on the first day of classes in January 2006. When he saw me his face lit up. I don’t think he remembered my name, but he recognized my face. We talked for a moment — he asked how I was doing, I asked how he liked campus — before going to our respective classes.

I moved from fan to professional in college when I started assisting Bill Frakes at Sports Illustrated. Instead of watching the games, I was covering them. In the two years I worked and went to school I think we did 3 features on Tim (I’m not sure when he became Tim instead of Timmy). He was everyone’s favorite athlete to love or hate.

In the years since we’ve passed each other multiple times, mostly at football games he was either playing in or broadcasting.

I saw him this past January after not seeing him for a few years. We passed each other on the field of the Georgia Dome before the Peach Bowl. We were both there for ESPN but for very different reasons. He was walking across to the Gameday set, I was taking pictures of Alabama’s band practice. Still, after all these years, he stopped to say hello, to ask how I was doing, to tell me it was good to see me.

Then, just last month, Sports Illustrated called again. Bill and I packed some cameras and lights and drove to Columbia, SC. Our subject was a familiar one — a consistent player. Tim Tebow greeted us for his portrait before his team, the Columbia Fireflies, took the field. His face a little less fresh but no less friendly than when I first encountered it nearly 15 years ago.

He smiled, asked how I was doing and gave me a hug before dressing for his game.

For me, he’s someone I feel like I’ve grown up with. We met before we became adults and our lives took the shapes they’ve taken. Maybe for him it’s the same — I’m a face from his past, from his home town. Our stories intersected before he was a household name.

Sports Illustrated is running a story this week — another in a seemingly endless trove — on his transition from football to baseball.

I wish him well in his baseball career. And if our past in any indication of the future, I’m sure I’ll see him again down the road.

About the author: Laura Heald is a photographer, filmmaker, editor, and visual storyteller who has been featured on websites and magazines including ESPN, Sports Illustrated, NPR, Buzzfeed, Apple, and Nikon. She has taught commissioned workshops in over 20 universities around the country. You can find more of her work on personal site, business site, and Instagram. This article was also published here.